Two people have died on spot in a motor accident that occurred on Saturday morning along the Kabale – Mbarara road.

The accident involved a white Toyota Hiace taxi Reg No UBB 883V at around 5am at a place called Kakatunda in Bukinda subcounty in Kabale district.

Police say that the taxi was occupied by people who were traveling from Maya village, Rubimbiri parish, Kasambya subcounty in Mubende district to Kisoro district to attend a burial.

The exact cause of the fatal incident has not yet been established but Police are suspecting fatigue on the part of the driver and obstruction by fog.

“The cause of accident is being investigated. But what I know is – people who travel at night have always been fatigued. And because of the fog and mist, their vision is always poor which has always caused accidents,” the Police spokesperson for Kigezi Region, Elly Matte said in a statement.

Bodies of the two dead people have been transfered to Kabale referral hospital mortuary. They have been identified as Manikuze Charles, 38, and
Bagaruye Lawrence, 60, both from Maya village, Rubimbiri in Mubende district.

All the injured including the driver only known as George who is said to be in critical condition are being attended to at the same hospital.

“It’s very unfortunate. We always emphasize that once on the road, all users must be extra careful and follow the rules and regulations of the road to avoid such problems that end up taking out innocent citizens,” Matte said.

A week ago, a nasty motor accident involving a Gaaga bus, a tractor and a trailer killed 22 people in Kiryandongo district leaving the country in grief.

The incidents have revived the debate on the state of traffic law enforcement and reckless driving. Cabinet this seek approved proposals by the Ministry of Works on road safety which included installation of speed limiters in all commercial vehicles.

Take a Break: A Quiet Yet Fun Weekend with Friends at Lake Bunyonyi 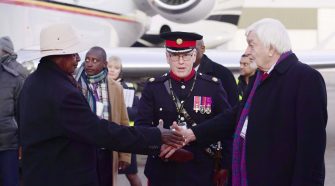