Police in Kabale is detaining a man for allegedly defiling a 14-year-old school going girl.

Robertson Nasasira, 27, a resident of Kanyakiriro cell Nyabikoni ward Central division Kabale municipality was arrested and is currently being held at Kabale police station, according to the Kigezi Regional Police Spokesperson, Elly Matte.

It is alleged that Nasasira defiled the victim on July 4 (last week) in the evening hours at Kacwekano around lake Bunyonyi.
On that day, allegedly, the suspect together with another man still at large while driving his RAV 4 Reg No UAP 605P blue in colour met the victim from school at Kabale SS and opted to give her a lift to her place in Nyakabungo cell Katokye parish Kyanamira sub county.

“Instead, they diverted towards Lake Bunyonyi and tied her face with a piece of cloth and both of them raped her,” Matte said in a statement.

The suspects are said to have abandoned the victim at the scene only for a boda boda cyclist to find her and take her to Police where she registered the case.

“Fortunately, she had seen and identified them. The suspect was arrested with his very car which is also at Kabale police station and inquiries are underway CRB 1513/2018 refers,” Matte added.

He said that children should be taught not to take offers from strangers who make offers of any kind. This, Matte says, poses a risk to these young children.

“We shall not tolerate such irresponsible people of that nature who are supposed to help our innocent citizens but are doing the contrary. Inquiries are underway and afterwards, they [suspects] will be arraigned in court and answer charges accordingly,” he said. 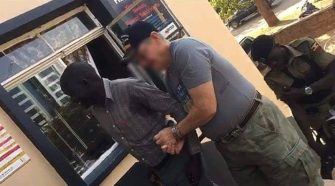