Margaret Muhanga, the MP for Burahya county in Kabarole district has warned of a possible ‘apartheid’ in Uganda, claiming that some resorts in Kabarole deny black people access on the basis that they scare white guests.

In a tweet on Monday, Muhanga warned Ugandans of a “rising apartheid in Uganda” claiming that three White owned resorts in her constituency do not allow blacks in their premises especially during the peak season.

She said that whites argue that blacks stare at them which scares them. The legislator has asked security to take keen interest into the matter.

When contacted by SoftPower News, Muhanga who was hesitant to reveal the names of the resorts, said on December 26, her auntie and a relative were blocked from accessing one of the places by security on claims that Africans are not allowed there.

“Yes, there are places meant only for residents, like when you go to Sun City in Johannesburg. There is a place where you can not cross if you are not a resident, which is understandable and there are many like those in Dubai where they say such and such a place is only for residents. But they always create a space for those revelers who would want to come and take a cup of tea and other drinks,” Muhanga said.

“On December 26, my auntie went with her sister who lives abroad to some lounge here, still owned by whites and the man (security) was quaking as he told them ‘Please go away I don’t want my bosses to find me even negotiating with you. Whites are scared when they see Africans here’,” the MP told disclosed to this news website on phone.

The resorts in question, Muhanga said, do not only turn away black people considered to be hangers-on or of a low income class, but blacks in general, including those that can manage to spend as they lounge.

She described as ridiculous the fact that people are turned away from a leisure facility just because of their skin colour.

“They [her aunties] weren’t these hangers-on, these were serious people driving an ML-Class car,” she said.

The lawmaker revealed that such a practice is unconstitutional adding that she has alerted security to do the follow up, now that she has raised the redflag.

She said that such resorts could be harboring element who are on espionage missions and that this can only be established if her concern is followed up by security agencies.

“It is really a security concern. If the blacks maybe wanted accommodation, then they would argue that the places are booked. But how can you say only whites are allowed here? It sounds ridiculous,” a furious Muhanga said.

When contacted on the matter, Police Spokesperson, SSP Emilian Kayima denied knowledge of any hotels or places which are monopoly to whites. Kayima instead asked MP Muhanga to name the said resorts so that security can embark on investigations. 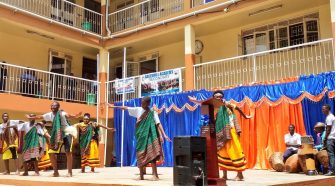