GOMA – Democratic Republic of Congo’s President Joseph Kabila has appointed General Celestin Mbala, who supports the President to seek a controversial third term and who is also under international sanctions for the violation of human rights as new army chief of staff.

DR Congo’s state television also reported on Sunday that Kabila had appointed General John Numbi as the new Inspector General of the Congolese Armed Forces while General Gabriel Amisi was promoted to the role of Deputy Chief of Staff.

Both Numbi and Amisi have sanctions by UN and United States for violation of human rights and undermining democracy in the Central African nation.

The three appointed generals are considered President Kabila’s key allies, who have crushed dissent and helped him win elections in the past, opposition lawmaker Martin Fayulu told this website by phone.

Some of the members of President Kabila’s ruling party and his military allies are now publicly arguing that Kabila has the right to run again.

Kabila who was supposed to step down in 2016 has not commented whether he will seek a third term or not and political observers say the new military appointments send messages that Kabila might want to extend his rule in office.

His refusal to step down has sparked street protests in which civilians have died. Last Saturday, more than a hundred academicians from several universities called on President Kabila in a petition to step down.

The appointments also come at a time when many Congolese and members of the international community await Kabila to address the nation before July 20 where he is expected to make announcements on whether he will seek a third term or step down.

Lambert Mende, the minister of communications, has told this SoftPower News that the world would know whether Kabila will seek a third term or not this month.

DR Congo, Africa’s largest copper producer, has never had a peaceful transfer of power and the country has failed to defeat dozens of militia groups including Allied Democratic Front (ADF), a radical Islamic rebel group from Uganda operating in Eastern DR Congo. 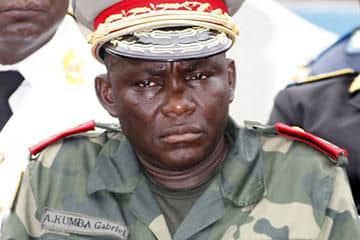