GOMA – Joseph Kabila, the President of the Democratic Republic of the Congo and his ruling coalition announced on Wednesday Emmanuel Ramazani Shadary, a former Minister of the Interior and Permanent Secretary of Kabila’s party (PPRD) as its candidate for the long-delayed presidential elections scheduled for December 23.

Kabila, whose second term expired in 2016, has repeatedly said he would respect the constitution which bars him from seeking a third term.

The coalition, Common Front For Congo (FCC) picked 57-year-old Shadary as the candidate after 10 days of consultations by party members.

With this choice, it means that President Kabila respects the constitution which forbade him a third mandate in office and will step down after a new president assumes power.

Political observers say the decision by Kabila, 47, who has been in power since 2001 following the assassination of his father Desire Laurent Kabila, is “a political mileage” and a sign of growing democracy.

“It’s good news and there is a sign of hope coming in this country,” said opposition lawmaker Martin Fayulu by phone.

Human rights activists said if Kabila had decided to run, his decision could have triggered unrest similar to what happened in neighboring Burundi sparked by President Pierre Nkurunziza’s decision to seek a third term.

Under Kabila’s 17 years rule, hundreds of thousands of people have been displaced by violence and his government has failed to defeat dozens of militia groups operating in the east of the country.

Local civil society organizations also say under his leadership, the country’s resources have been stolen by those in power and foreigners. In Transparency International’s 2017 Corruption Perceptions Index, the DRC ranked 161 out of 180 countries. The World Bank estimates GDP per capita annual income at $450, or 225th out of 237 economies surveyed.

But as Kabila announces his successor, thousands of Katumbi’s supporters took to the street in Johannesburg, South Africa on Tuesday demanding Kabila allow him take part in the election. The government has barred Moïse Katumbi, a leading opposition leader from entering the country to register as a candidate and participate in the December elections.

Katumbi, 53, last Friday planned to travel home by road via Zambia after authorities in Kinshasa denied him permission to fly from South African to Lubumbashi, a province of Katanga.

Sesanga said the refusal to allow Katumbi enter the country is an attempt from President Joseph Kabila to derail Katumbi’s candidacy.

“It is crucial, from this point of view, to ensure respect for the rights and freedoms of all Congolese, as guaranteed by the Constitution and the relevant African and international instruments, as well as to implement appropriate restraint measures and create an environment conducive to fair electoral competition,” Faki Mahamat said in statement. 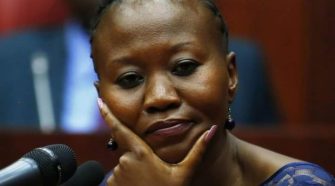