Kampala City Traders Association (KACITA) has proposed that an independent landlord-tenant tribunal be set up to handle and resolve misunderstandings between the two parties as opposed to running to Courts of law in case of disagreements.

This was among the many proposals submitted by KACITA to the Parliamentary committee on Physical Infrastructure which has commenced the public hearing on the Landlord and Tenant Bill, 2018.

The proposed law which was tabled by the Ministry of Lands and is currently under determination before the Committee of Physical Infrastructure seeks to provide proper regulation of the landlord-tenant relationship which currently doesn’t exist.

Section 30 of the Bill suggests that all matters of disputes should be settled by courts of law.

However, KACITA Chairman, Everest Kayondo said that taking every dispute before courts of law will be a wastage of time and resources.

“Our thinking is that we create an independent landlord-tenant tribunal which will help mitigate these issues and the only matters that would be forwarded to courts of law are those that the tribunal would have failed to resolve,” Kayondo said.

Kayondo as well called upon the committee to help clarify on the degree of annoyance as provided for in Section 51 of the Bill. The Section provides for the tenant to drag the landlord to courts of law in case he annoys him.

The committee also interfaced with members of the Association of Real Estates Agency Uganda who expressed concern that the Bill dictates the relationship between the landlord and tenants without giving room for negotiations between the two parties.

The other bone of contention was on whether some tenants should continue to be coerced to pay their rental fees in dollars instead of Uganda shillings. While KACITA suggested that tenants pay in Shillings, the team from Real Estate Agency Uganda said it is okay to use any currency as long the market forces determine the price. 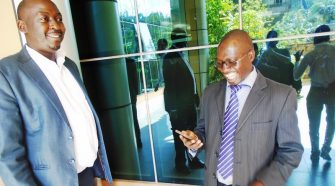