The Speaker of Parliament, Rebecca Kadaga has asked the Prime Minister, Dr Ruhakana Rugunda to address the country over sanctions that were issued by the U.S. government against the former Inspector General of Police (IGP), Gen. Kale Kayihura and his close family members.

The ruling followed a matter of national importance raised by Buhweju County MP, Francis Mwijukye who wondered why government has kept silence ever since the U.S government slapped sanctions – travel ban and seizure of Kayihura’s properties in the U.S.

“We have seen in the media reports that the U.S government has slapped sanctions upon Gen. Kayihura. I believe Kayihura worked under certain command, he never worked alone, he served for a long time as the IGP,” Mwijukye said.

Mwijukye said that Kayihura did his best to maintain the government in power, he was praised and appraised by the President as one of the best government’s cadres.

While giving her ruling, the Speaker noted that the issue would require the Prime Minister to address the house over the matter as early as possible.

“That is a matter that requires the Prime Minister to come and address the country,” Kadaga ruled.

The Speaker’s ruling was received by the Minister of State for Finance, David Bahati who was stood in for the Prime Minister.

“It’s true we have received that information and we are studying it, the Prime Minister will come and address the house on this issue at the next sitting,” Bahati said.

Kayihura was accused of gross violation of human rights under Section 7031 (c) of the FY 2019 Department of State, Foreign Operations and Related Programs Appropriations Act. 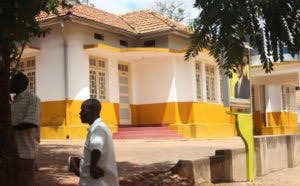