The Speaker of Parliament, Rebecca Kadaga has expressed disappointment in regard to the process of passing the Shs 40.5 trillion national budget for the 2019/20 financial year, saying it was done haphazardly.

Kadaga made the comment on Thursday during her opening remarks before the Minister of Finance presented the highlights of the national budget, at Kampala Serena Hotel.

“I was not pleased with the manner in which the budget was passed,” she said.

“Ministerial Policies which were supposed to be presented by the 15th of March were delayed. It was quite disturbing that an addendum to the budget was sent to the House after the appropriation bill had bee sent to the committee on budget,” Kadaga said.

This, Kadaga said, prompted the House to again reconvene to discuss the addendum.

“This is very very untidy, and I hope the Ministry of Finance will not repeat it the coming year,” the Speaker said.

Out of the Ministerial policy statements that were presented before Parliament recently, nine of them had vital information lacking and could not be further processed by the Parliament Committee on Budget.

On May 24, Parliament approved a Shs 40.5 trillion national budget for the 2019/20 financial, a 20 percent increment from last financial year’s budget which stood at Shs 32 trillion.

The total proposed annual budget for FY 2019/20 as originally submitted to Parliament by the Minister of Finance on March 28 amounted to Shs 39.5 trillion, of which Shs 27.2 trillion (69% to the total) is due for appropriation and Shs 12.2tn (31% of the total) is for Statutory Expenditure charged directly on the Consolidated Fund.

However, on May 9, the Minister of Finance submitted Corrigenda to the draft estimates and an addendum to the Corrigenda which revised the total proposed annual budget to Shs 40.8tn out of which Shs 27.9 trillion is for appropriation while Shs 12.5 trillion is meant for statutory expenditure.

Similar to Kadaga’s comments regarding the delays by government in the budgetary making process, Deputy Speaker of Parliament, Jacob Oulanyah recently said 2019 “has been a very abnormal year in terms of processing this budget”.

“We all know that we never had Ministerial Policy Statements even a month after the deadline and I was hoping that the Government Chief Whip when she rose up to appreciate the members, she would have concluded with an apology and promise to do better because to just say thank you when members went through hell is unfair, “ Oulanyah said during a recent plenary session.

He has previously recommended that the Parliamentary Rules and Privileges Committee considers setting up penalties for Ministries, Agencies and Departments that have continuously stalled government business by presenting Ministerial Policy Statements which have been found wanting. 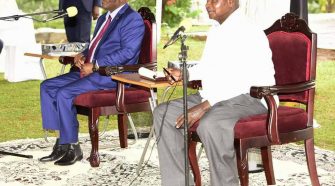