The Speaker of Parliament, Rebecca Kadaga has ordered the Chairperson of the committee on Commissions, Statutory Authorities and State Enterprises (COSASE), Mubaraka Munyagwa to immediately stop any fresh investigations into the role of Bank of Uganda in the closure of the seven defunct banks.

The decision taken by the Speaker follows petitions to her office by concerned Ugandans who objected the move by Munyagwa who is alleged to have recently asked officials of Bank of Uganda to account for a total of Shs 487bn that was injected in the closed Crane Bank before selling it to DFCU bank.

In a letter dated June 10, the Speaker told Munyagwa that he is out of order to attempt to reconsider a matter that was debated and concluded by the House without any fresh mandate from the Auditor General’s report or any authority of the House.

Kadaga noted that under rule 178 (4) of the Parliament Rules of Procedure, upon receipt of the Auditor General’s (AG) report, the committee is required to consider and examine the recommendations of the AG and thereafter lay the report of the committee on table for purposes of debate by the House under clause (5) of article 163 of the Constitution.

The Speaker said that once the committee as a delegate of the House has tabled a report for debate, it has sufficiently discharged its burden and the report becomes property of the House.

Once the report is adopted, it becomes a report of Parliament and the committee then stands discharged in respect of any authority of the House on the subject matter of the report.

“It is evident that no other report has been authored by the Auditor General to Parliament in respect to closure of commercial banks to warrant an inquiry into the same by the committee. Similarly, no authority of the House has been granted to freshly investigate the closure of commercial banks,” Kadaga said in the letter to the COSASE chairperson.

Kadaga reminded Munyagwa that once the recommendations were adopted, it is incumbent upon the government to respond by way of Treasury Memorandum which has not yet been done.

“In light of the above findings, I am of the firm opinion that your action in trying to reopen a matter that has already been substantively considered and finalized by Parliament in the very recent past, in the absence of fresh report of the Auditor General on the subject or authority of the House, is not founded in the Constitution or indeed in the Rules of Procedure of Parliament,” Kadaga said.

She observed that it is prudent that Parliament allows the Bank of Uganda to focus on implementing the resolutions of Parliament that were recently made.

“In any case, I am sure that there is more than enough work concerning other entities before your committee that equally deserve the attention of your committee,” Kadaga added.

“I therefore propose and guide that you should refrain from further proceeding in relation to this matter until otherwise directed by the House,” Kadaga added. 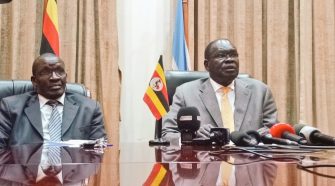