The Speaker of Parliament, Rebecca Kadaga, has expressed disappointment that Government has once again resurrected plans to construct a dam along Murchison falls a position that is contrary to the earlier commitment.

Government signed a memorandum of understanding with a South African company, Bonang Energy and Power Limited to conduct a feasibility study on the possibility of building a power dam at Uhuru Falls in Murchison Falls National Park.

During her communication to the house on Wednesday, the Speaker said that government has left her confused on what exactly they are up to by giving away Murchison falls.

“I don’t know what to say over the issue of Murchison falls. As you may recall in August, a petition came to my office from tour operators urging government not to interfere with Murchison falls. I conveyed the matter here, after some dilly dallying, we were informed on the floor of the house that nothing was going to take place,” Kadaga said.

She added that, “Last week, I heard that the company was cleared to construct a dam at Murchison falls, I want to know what are you up to, what are you exactly doing.”

The State Minister of Planning and Economic Development, David Bahati told the house that the matter was discussed before Cabinet and no decision has so far been taken.

“We discussed that matter in cabinet; the Minister of Energy made a statement two weeks ago to the country and we are still making some studies over Murchison falls and there is no concrete decision taken,” Bahati said.

In response, Kadaga reminded government that they should listen to the concerns of Ugandans who own the natural resources.

“I want to draw your attention to the constitution, to the fact that the natural resources of this country are held in trust by the sitting government on behalf of Ugandans and the people have continuously said that we don’t want you to do anything on the falls, so what are you studying?” Kadaga said.

The House thus summoned the Minister of Energy to report to the house and clarify on the issue at hand. 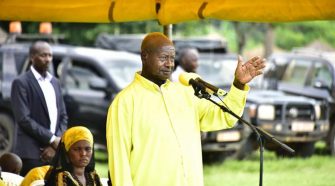 Museveni to Ban Use of Hoods on Boda Bodas, Enforce Numbered Helmets