Rwanda’s President and the Commander in Chief of the armed forces, Paul Kagame has promoted and appointed 8 senior officers of the Rwanda Defence Forces (RDF) to higher ranks and offices. The shuffling of the army happened a day before talks with Uganda held in Angolan capital, Rwanda.

Others are Lt Col Louis Kanobayire who has been promoted to Colonel and appointed Chief J3. Lt Col Richard Ndamage has been appointed OPS Officer first division.

Lt Col Ingace Tuyisenge is the new Deputy Military Police Regiment Commander and Captain Danny Gatsinzi is promoted to the rank of Lieutenant Colonel and appointed Chief of OPS in Air Force.

The changes come exactly three months after Kagame dropped the Army Chief of Defence Staff Gen Patrick Nyamvumba replacing him with Gen Jean-Bosco Kazura. Nyamvumba who had served as the CDS since June 2013, was appointed minister of internal security./// 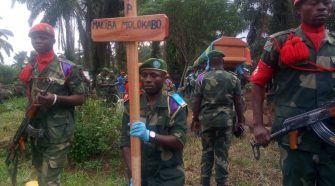