Rwandan President, Paul Kagame has called for what he termed as a spirit of frank, brotherly discussions in finding remedies to the current challenges facing the East African Community (EAC).

Kagame made the remarks on Friday while opening a one-day Strategic Retreat of the Council of Ministers and Heads of Organs and Institutions of the East African Community, EAC, convening in the Rwandan capital of Kigali.

“Let’s maintain that same spirit of frank, brotherly discussion, aimed at finding the right remedies to the current challenges we face in the East African Community,” Kagame who is the Chairman of the EAC told delegates.

“Ten years ago, a similar retreat was held here and it resulted in some good solutions that have contributed to furthering our East African agenda,” President Kagame said, adding that “we urgently need to get our house in order, both in terms of ownership, which includes paying our respective dues as well as enhancing transparency and accountability in the management of the institution”.

He said “it will be very difficult to achieve even the more simple goals we have set if we don’t get this right”.

Kagame called for urgently unblocking obstacles in ongoing projects in order to finish the good work the EAC has started together.

“Many of these require little more than political will. Even small triumphs generate so much goodwill and increase the trust of our people in the EAC. So why deprive ourselves of success that we need, and that is within reach?” he added

Kagame argued the Community cannot begin to deal with bigger and more complex processes before the basic issues are addressed.

His somewhat progressive message on Friday is in sharp contrast with comments he has made in the recent days at the height of a standoff between Rwanda and Uganda. In recent weeks, Kagame and his government have strongly accused Uganda for unlawfully arresting Rwandan nationals as well as harassing them.

The allegations were preceded by the closure by Rwanda of the main border with Uganda at Katuna, blocking cargo trucks for over a week.

In February, while commenting on the relations between Uganda and Rwanda, Kagame termed is as very intriguing given the good foundation and historical ties from which both countries should be building a good relationship.

He said the existing friction is a matter that can be resolved and must be resolved, adding that “the alternative is not something that we should even be thinking about, or entertaining, that we can stand in the way of our own progress or the progress of all East Africans”.

The Rwandan leader later said the closure of the Katuna border was to send a signal to Rwandans that they are not guaranteed of security when they cross to Uganda.

But on Friday, he had a more unifying message saying that “only by working together will we spur innovation, create employment and generate the wealth needed to transform our East African Community”.

“Our goal is to be a dynamic, prosperous, people-centered, private-sector led region. We have to facilitate by listening to what the business community and ordinary citizens are telling us, and find a way to meet their expectations,” he said. 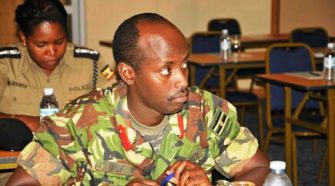