Kamwenge district local government has commissioned the civil works for upgrading of the 16.67km Bigodi-Kahondo-Busiriba-Bunoga road in a bid to facilitate the smooth movement in the area.

The commissioning ceremony as held Monday and was presided over by the Resident District Commissioner of Kamwenge, Geoffrey Mucunguzi.

Locals in the area say, the road had become impassable for the last two years subsequently paralyzing business in the area.

Farmers seeking to move their produce have also been facing difficulty accessing markets due to the poor road.

Annet Kobusinge, the Kamwenge District Engineer said over Shs 46m will be used to upgrade the 16.6km road to gravel standard.

Aggrey Natuhamya, the Kamwenge district Chairperson appealed to the community to engage in supervision of the civil works on the road to ensure that the contractor does a good job..

“When you are working and people demoralize you, you also lose the morale but as beneficiaries, you need to monitor and supervise your first class marram road,” Natuhamya said.

He commended the team work being exhibited by district leaders in the delivery of services.

Natuhamya called upon the public to always appreciate the work done by their leaders in the area.

Locals said they had been neglected for a long time in regard to road infrastructure.

“We are happy to see that after a long time, this road is going now to be worked on. It had become difficult to access Busiriba for council meetings,” a one Jack Baguma explained.

The road construction launch was also witnessed by the area woman MP, Dorothy Azairwe Nsheijah and Joseph Birungi, the councilor representing Kamwenge town council who is also the secretary for works at the district. 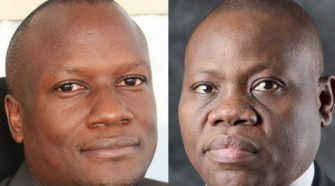