Court in Kanungu district has Thursday charged a former convict said to be a prime suspect in the recent abduction of an American tourist and a tour guide in Uganda’s Queen Elizabeth national park.

The group of tourists was traveling in a van during a game drive when it was waylaid by the armed men who took Kimberly and Mirenge hostage. An elderly couple (foreign tourists) that was also in the vehicle was left.

The abductors later demanded for a ransom of USD 500,000. Six days after the abduction, a joint security operation led to the rescue of Kimberly and Mirenge.

In subsequent days, arrests of some of the suspected abductors were made by security agencies.

On Thursday, Police reported that “the task team actively investigating the kidnapping incident and successful recovery of Kimberly and Mirenge has today charged a former convict and mastermind behind their kidnap”.

The Chief Magistrate’s Court in Kanungu charged Byaruhanga with two counts of kidnap with intent to procure a ransom.

The prevailing facts indicate that on 2nd April 2019, the suspect played a supportive role of surveilling the movement of an American tourist from Bwindi national park to the Queen Elizabeth national park, Police spokesperson, CP Fred Enanga said in a statement.

Police also said that the former convict was highly involved in the post–kidnap demands and that he is also accused of planning and carrying out typical kidnappings, aggravated robberies and the murder of a resident in Kanungu town council.

“We plan to file additional charges against him and his criminal associates,” Police said.

“The task team is also reviewing circumstances under which members of his local kidnapping ring were granted bail on similar charges of kidnap before court”.

Police described the progress in the investigation in the Queen Elizabeth park abduction as “largely successful” and attributed a greater part of this success to the effective anti-kidnap strategies in place and the close cooperation from the community.

“So far, kidnapping ring in Kanungu district has been dismantled, additional suspects are being processed and the operation to apprehend the known remaining perpetrators of the criminal kidnapping enterprise is still ongoing”. 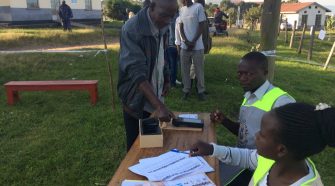