Government has established a COVID-19 Fund that will be charged with receiving donations from individuals and organizations who want to support government’s response against the spread of coronavirus.

This was revealed on Tuesday by Prime Minister Dr Ruhakana Rugunda who heads the National Taskforce on COVID-19. He said that although the formal launch will be handled by the President, work has already began.

“A number of people have been asking in regard to where they can channel the resources they would want to contribute. We want to have clarity in government as to how this is going to be done,” Rugunda noted.

“We want to help government officers especially those who are at the frontline of the fight against Covid-19 to really to be able to concentrate on the tasks they are supposed to be performing,” he added.

“We want to give more time to the Minister and her team to concentrate more in the field than in mobilization of resources since there are already a number of people who can handle this responsibility”.

The President has assigned the Minister in Charge of General Duties, Mary Karooro Okurut to take political charge of the fundraising effort.

The President has also appointed Dorothy Kisaka, the Senior Governance Advisor to the Prime Minister, to be the Administrator of the Fund.

Kisaka’s role, according to Rugunda, is to ensure there’s confidence in the process and that the funds generated reach their intended target – to support the efforts led by Ministry of Health.

A bank account has been opened in Stanbic Bank through which the donations will be deposited.

Prime Minister Rugunda hailed all those that have so far contributed towards the effort, saying it is this collective support that will help government response much faster.

He used the event to particularly laud the area Chairman of Kireka who has mobilized Shs 1 million and sent it to the Permanent Secretary in the Ministry of Health.

“He played an extraordinary example that this war is for everyone to fight,” Rugunda said.

During the event on Tuesday, a number of organizations made several donation including food stuffs, cash and vehicles.

He said the team that will be managing the COVID-19 Fund will be announced later this week. He said there will be transparency to make sure every coin collected serves the purpose of fighting this pandemic.

“It is true as the President said, we are trying to equip health workers with transportation. So, the pickups will strengthen and support our health workers”.

He added that Uganda should use this period to build national capacity so that the products that are currently in short supply such as the Personal Protective Equipment (PPE) can be manufactured locally.

“Government has already interacted with local manufacturers to be able to do this to build our economy and create jobs”.

For those intending to make a donation….. 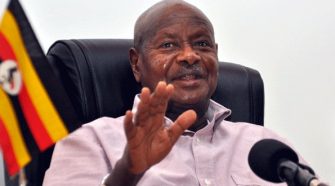 Museveni Reaffirms “Rotten Potatoes” in Police will be Prosecuted and Replaced