The Minister of Finance, Matia Kasaija has been accused of illegally terminating the contract of the former Executive Secretary of the Departed Asians’ Property Custodian Board, Bernard Tumwesigire after he unearthed a total of 3,226 properties belonging to departed Asians, that had not been declared.

Tumwesigire who was dismissed from his work by the Minister through a phone interview made the accusations while appearing before the Parliament Committee on Commissions, Statutory Authorities and State Enterprises (COSASE) that is probing into allegations that some government officials have since fraudulently taken over some of the properties.

He told legislators that despite his role in reviving the Departed Asians’ Property Custodian Board, his contract was cut short and he has not been paid for the services he rendered to the Board for the period between February 2007 and May 2015.

The former Executive Secretary said he was shocked when in May 2016 he got a call from Minister Matia Kasaija that he had been fired from work, with no clear explanation.

“It is very unfortunate that Kasaija later drafted a termination letter which I was later given but on close scrutiny, it doesn’t point out any reasons as to why my contract had been terminated,” he told MPs sitting on the committee.

“I have since petitioned the relevant authorities including the Prime Minister and the Attorney General who have all recommended that I be cleared of my arrears but the Minister has since refused to adhere to their directives” Tumwesigire said.

“By 2015, I had an outstanding claim totaling to Shs 991m which included salary arrears which were accrued since 2007. However, following a Board meeting on August 6, 2009, it was resolved that as soon as I hand in a work plan for the remaining Asian properties, my contract would be extended for 2 years,” Tumwesigire said.

He revealed that four days after he had handed in detailed work plan as requested, his contract was unceremoniously ended.

Tumwesigire as well told the committee that his fall out with the Board members followed his research findings on the properties of the departed Asians which findings contradicted those contained in a Cabinet information paper drafted by the Ministry of Finance Under Secretary, Betty Kasimbazi.

He said that Kasimbazi and Kasaija had recommended the closure of the Departed Asians’ Property Custodian Board highlighting that there were only 136 properties that were pending disposal.

But following a study he claims he conducted for two years, Tumwesigire says he discovered that the pending properties were as many as 3,226 across the country.

“These two (Kasaija and Kasimbazi) had under-declared the properties and wanted the Board to be summarily closed down so that they would later share the other properties. After my findings, the decision by Cabinet was rescinded and since then, my life has not remained the same,” Tumwesigire said.

On the other hand, the committee ordered Tumwesigire to avail the committee with the Board seal which he has since refused to return to the Ministry until his outstanding salary is paid.

The committee has thus asked Tumwesigire to return to Parliament on July 23 so as to avail more information that will help guide the probe. 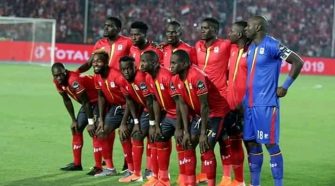