Members of Parliament under Kasese Parliamentary caucus have renewed their call to government to expedite justice for the Rwenzururu King, Charles Wesley Mumbere and his subjects who were arrested three years ago.

Mumbere’s Rwenzururu palace was attacked on November 26, 2016 by security forces under the command of Maj. Gen. Peter Elwelu leaving about 150 dead and more than 200 arrested together with King Mumbere.

The Omusinga (King) has since been charged with murder and remains under house arrest with conditions not to move outside Kampala metropolitan area without permission of court.

Led by the caucus Chairperson who doubles as Kasese Woman MP, Winnie Kiiza, the legislators expressed concern that to this day, justice has not been served to the Rwenzururu cultural leader and his subjects.

“We demand that government ensures that the justice for the people of Kasese is expedited, so that they can go back and take care of their families. We still believe that this was genocide of the highest order to the Bakonjo as a tribe because attacking a palace is attacking a tribe and destroying a centre of their values, love, wishes and aspirations,” Kiiza said.

Robert Centenary said the people of Rwenzururu have given Government enough time for dialogue but that the talks have proved to be “foolery”.

The leaders from the area will soon come up with new measures to deal with the Rwenzururu issue, he said.

“Imagine these suspects were your daughters and sons, how could you feel? Can you get the human face and find resources, designate the appropriate authorities to expeditiously hear out those people in prison and those who are dead also need Justice?” Centenary said.

Centenary demanded to know whether there are plans by government to compensate families that lost their loved ones.

“Government has bought enough time, three years in the name of dialogue. The dialogue which doesn’t yield any single result and this foolery must stop. As the leaders of Kasese, in a few weeks to come, we shall be communicating our next course of action,” the MP said. 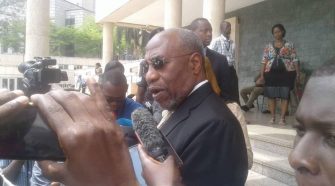