The opposition Chief Whip and Kira Municipality MP, Ibrahim Semujju Nganda has warned that the Parliament report on the on-going Bank of Uganda (BOU) probe risks being challenged before Court.

Semujju passed the warning while commenting on Speaker of Parliament, Rebecca Kadaga’s stand on the leadership of the Committee on Commissions, Statutory Authorities and State Enterprises (COSASE) leadership, during a television political talk show.

During her first media address in 2019, Kadaga said that the committee leadership of Abdu Katuntu and Anita Among will carry on the work of the committee into BOU probe upto the end of February. She said it was neater for the committee to complete their investigation, hand in their report and then the changes in leadership can be made.

Semujju in response noted that the Speaker is acting against Parliament rules well knowing that the term of the current committee ends on January 13.

“People could be planning for a ceremony to conclude the report but that report would be dismissed by Court within five minutes,” Semujju said.

Semujju noted, “I am looking for Katuntu because I have known him to be decent and it can’t be in his name that rules are being broken, for Anita Among, I have no problem.”

Semujju added that he wonders why the Speaker wrote to him earlier requesting to extend Katuntu’s tenure if she knew she had all the powers to bend the rules.

“I saw her say she is the Speaker. I have her letter which she wrote requesting. At that point, didn’t she know she was the Speaker?” Semujju wondered.

The opposition Chief whip said that it should not be the FDC that is seen to bend rules get this is what they have been criticizing the ruling party for.

“I have seen decisions of Parliament over turned in the past, the report Hon. Katuntu did on Handshake is before court if that is the road the Speaker is taking so be it.”

The FDC Vice president, Eastern Region, Proscovia Salam Musumba insisted on the party’s earlier position advising the Speaker to constitute the current leadership into a select committee so that it carries on with the BOU probe but leave the rules to serve the purpose.

“Bank of Uganda isn’t the only committee business available. The Speaker should allow the new team to take over office and handle other business but constitute the current leadership to carry on the probe as a select committee.” 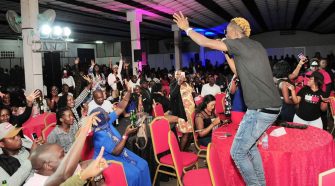