A group of 24 people charged with masterminding the killing of former AIGP Andrew Felix  Kaweesi have been remanded again to Luzira prison.

On Wednesday the state prosecutor told court that investigations were still ongoing and asked for more time.

However, one of the accused told Grade One  Magistrate Noah Ssajjabi that he had been tortured  and forced  to confess to the killing.

“I was forced to sign documents I don’t know,” Jibril Kalyango told the Magistrate on Wednesday.

He also told court that his wife had been arrested together with his 9 -month baby and demanded to know their whereabouts.

The magistrate advised him to raise the issues to High Court which he said has the jurisdiction over their case before remanding them up to August 24th, 2017.

Twenty four people are accused of masterminding the murder of AIGP  Andrew Felix Kaweesi, his driver and bodyguard early this year as they left Kaweesi’s home in Kulambiro. 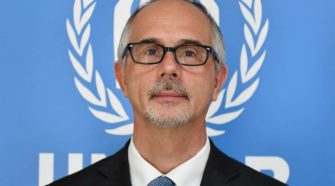