The Inspector General of Police (IGP), Gen Kale Kayihura has dismissed allegations that the released ‘Kifeesi’ group commanders led by Paddy Sserunjogi alias Ssobi have been working with police to terrorize Ugandans.

Kayihura wondered while appearing before Parliament’s committee of Defence why Ugandans continue to believe anything said by such criminals who have no credibility.

“First of all Sserunjogi is a criminal, in law there is what we call cogency meaning that Court or an investigator might believe or rely on the evidence of one person because that person is believable,” Kayihura said.

“Evidence most of the time depends on credibility of somebody giving the evidence, why do you give credibity to criminals? Their submissions shouldn’t be taken as the gospel truth but this should, however, be investigated.”

On why police released the three suspects, Kayihura said that this was done upon request by the Internal Security Organ (ISO).

“We didn’t release him to go free, he still has files with us but there is a sister security agency that has issues to either question him or work with him and that is how we work,” Kayihura said of the release of self confessed murderer Sserunjogi.

“Perhaps they want to interrogate him or work with him, it might be an intelligence operation, they requested us and we handed him over.”

Kayihura explained that this normally happens between sister agencies while working together on certain criminal cases.

Earlier, members of the Defence committee asked Kayihura about the relationship between sister security agencies alluding to interference in police work by Minister of security, retired Gen Henry Tumukunde.

“Ask him not me!” Kayihura responded before appealing to MPs and members of the public to accord him the courtesy they accord other public servants.

“There are officers of the UPDF who have confessed to treason, but you don’t hear anybody linking those officers to the CDF ( Gen Muhoozi Rubakuba),” a visibly irked Kayihura wondered. 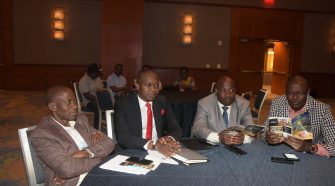