The Kenyan government has extended the daily night curfew extended as well as restrictions in movements in and out of Nairobi for another three weeks, in a bid to contain the coronavirus disease which has so far killed 14 in Kenya.

The extension of the measures was announced by President Uhuru Kenyatta during a national address on Saturday.

Kenyatta said the country has currently registered 343 Covid-19 cases, compared to the estimated 10,000 people earlier projected by experts to be infected by end of April.

At least 98 people have since recovered and 14 died.

The President commended health care workers and security personnel who are at the frontline of the fight against the disease.

He said he is encouraged by the progress made so far, but added “we are yet to be victorious”.

“And that’s the reason why I wish to announce that in accordance with the advice given to me by the National Emergency Response Committee on Covid19, the cessation of movement into and out of the Nairobi metropolitan area and counties of Kilifi, Kwale and Mombasa that are currently in force shall be extended for a further containment period of 21 days,” Kenyatta said.

He added that the dusk-to-dawn curfew will also be extended for another 21 days.

Kenyatta also said that in order to ensure Kenya’s porous borders and other threats do not compromise the efforts against the pandemic, the security forces will step up their alertness along the border areas.

He said he will continue to use the best scientific and medical advice to calibrate the country’s response and escalate or deescalate on the basis of how far the country is in regard to large scale infection.

However, his address was silent on the issue of testing cross-border cargo transporters, an issue that has raised public concern in Uganda. Over 8 Kenyan truck drivers have so far tested positive for Covid-19 on entry in Uganda, according to Uganda’s Ministry of Health.

Authorities in Uganda say the issue of truck drivers could undermine the efforts the government has already made to keep Covid-19 cases low.

On Friday, Uganda’s President Yoweri Museveni assured Ugandans that government in conjunction with the regional leaders is exploring ways of dealing with the continued imported cases of COVID-19 as a result of truck drivers

During his Saturday address, Kenyatta hinted on targeted testing for coronavirus, but he didn’t outline which groups. He said this is still hampered by the shortage in testing kits.

“Key to our response to the pandemic is our progress with targeted testing. We are working hard to overcome the greatly constrained global supplies of testing equipment in order for us to expand our capabilities nationwide,” he said.

On Friday, Kenya’s Health Chief Administrative Secretary Dr Rahid Aman said Kenya’s government will hold discussions with the Ugandan government on how best the testing of truck drivers can be done without interrupting the movement of goods.

“The government of Uganda has reported that it has tested 5 truck drivers from Kenya and they are positive. I was out in the border points earlier this week to assess them (points). What is happening right now is that on Ugandan side, truckers entering Uganda are being screened and tested for Covid19 which has also created some logistical problems as you are aware,” Rashid told reporters.

“But in the spirit of the EAC and this being a pandemic that knows no border, we are collaborating and sharing information. And that kind of information is available to us so we can be able to begin contact tracing,” he added.

“We have been talking about targeted testing and we will probably be doing the same thing in terms of testing truckers that may be coming into the country”. 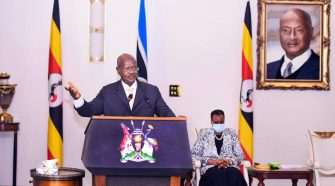 If You Want to Die of Covid-19, We Have Teams In White to Bury You- Museveni on Complacency