Opposition’s Raila Odinga has on Tuesday afternoon sworn in as Kenya’s ‘People’s President’ in an event held at the Uhuru park grounds in the capital Nairobi.

His running mate, Mr. Kalonzo Musyoka who was expected to swear in as Deputy president did not grace the function although reports indicate that he will take the oath at a later date.

While taking the oath, the National Super alliance strong man Raila Odinga held a holy Bible and said: “I Raila Amolo Odinga in full realisation of the high calling (to) assume the office of the people’s president of the Republic of Kenya, do swear that I will be faithful and bear true allegiance to the people and the Republic of Kenya; that I will preserve, protect and defend the Constitution of Kenya, as by law established, and all other laws of the Republic as adopted by the people of Kenya; that i will protect and uphold sovereignty, integrity and dignity of the people of Kenya. So help me God”.

The controversial event was witnessed by hundreds of Odinga’s supporters who kept cheering as he (Odinga) took the oath.

Government on Tuesday morning shutdown NTV Kenya and Citizen TV alongside its sister radio stations for allegedly defying the President’s directive of not relaying the event live.

Yesterday, police vowed not to give NASA supporters access to the Uhuru park, only to change their decision and withdrew from in and around the venue on Tuesday morning giving way to thousands into the Uhuru park grounds.

His swearing in which was administered at 2:45 pm by a county legislator remain questionable since Kenya’s laws only give the Chief Justice or his/her deputy the mandate to perform such a ceremony.

NASA abstained from participating in the October 2017 repeat polls demanding immediate changes in the electoral body (IEBC), which were not effected giving Mr. Uhuru an overwhelming win with over 98% of the total votes cast, prompting Mr. Odinga promise to swear in, which he has done today.

Odinga is not the first opposition politician in East Africa to swear in as president after losing to the incumbent, Forum for Democratic Change four time presidential flag bearer in Uganda also swore himself in (according to the video footage on the internet), in 2016 after losing to President Yoweri Museveni.

Mbarara: RDC Vows to Crack Down on Opposition Activities that Incite Public 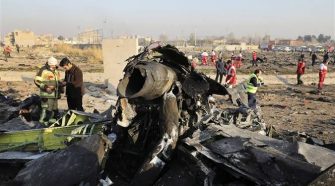 Iran Admits it Shot Down Ukrainian Jet, Says it Was Unintentional