Kenya’s Chief Justice David Maraga has certified as ‘urgent’ a case filed by three voters seeking to stop Thursday’s repeat Presidential election. Maraga has subsequently ordered that the case be heard on Wednesday despite being declared a public holiday.

The three voters say that IEBC Commissioners are serving partisan interests and Chairman Wafula Chebukati has publicly admitted that he cannot guarantee credible election. Furthermore, they say the withdraw of NASA candidate Raila Odinga from the highly contested election deems the exercise null.

They are being represented by lawyer Harun Ndubi.

Having examined the petition, Chief Justice Maraga has ordered the petitioners to serve the respondents (IEBC and IEBC Chairman Wafula Chebukati) and all Presidential candidates by 2pm on Tuesday.

Maraga also directed that respondents and Presidential candidates file their responses by 8am on Wednesday morning. The submissions are not to exceed 10 pages. 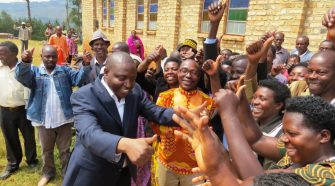