The Judicial Service Commission (JSC) in Kenya has vowed not to subdue to the intimidation and threats by the Executive and Parliament saying it will protect the constitution at whatever cost. In a missive released on Tuesday by Chief Justice David Maraga, the judiciary stated that it is prepared “to pay the ultimate price” to protect the constitution and rule of law.

Concerns by the judiciary follow numerous protests that have been staged outside courts of law in the recent weeks which the judicial body says have turned violent and intimidating. Some sections of the public and President Uhuru Kenyatta have bashed the judiciary in the wake of the September 1 Supreme court ruling that nullified the Presidential election results.

They accuse the judiciary of undermining the will of Kenyans.

“The judiciary will not allow anybody to dictate to us how to discharge its mandate as given by the people of Kenya under the constitution,” Chief Justice Maraga said in the strong worded statement.

“All sovereign power belongs to the people. We therefore will never agree to work in accordance with the whims and desires of the Executive and Parliament,” the statement further added.

The Chief Justice made reference to an incident on Monday in which Martha Karua a judicial officer was blocked by protestors from accessing the court premises where she was set to hear an election petition.

He said the ‘unlawful and savage’ attacks on the judiciary are denigrating, demeaning and degrading which are meant to intimidate and threaten both the judiciary and individual judges.

“On our part, we are prepared to pay the ultimate price to protect the constitution and rule of law.”

Meanwhile the judicial body has faulted the police for ignoring their calls to protect judicial officers amidst the rising threats.

“JSC notes with dismay that the Inspector General of Police who is expected to provide security to government facilities has repeatedly ignored calls to act exposing judicial officers, property and litigants to danger,” the statement read.

The Chief Justice appealed to Kenyans to stand up for the independence of the judiciary and rule of law.

Tomorrow (Wednesday), the Supreme Court is set to deliver the full ruling providing details on the grounds upon which the August 8 Presidential election results were annulled. 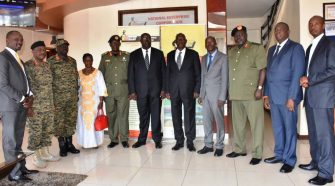