Some of the revellers might have waited too long for the much anticipated moment, others might have strained their legs for failure to get a seat, but when Kenyan musician, Nameless took to stage, his act was worth the wait.

UMA exhibition hall, Lugogo was filled to the brim Thursday night as weekly comedy themed show, Comedy Store held its maiden show this year. It was the first episode since the show moved from Bukoto. People started trickling in as early as 7pm as the Undercover Band led the acoustic session.

By 9pm, many could not find where to sit. The attendance was in excess of 2,000 people. In fact, some could have contemplated leaving but the thought of missing the performance by one of Kenya’s finest singers, famous for his ‘Sinzia’ hit was not the easy option.

Wearing his signature look (cap and glasses) along with a kitenge shirt and black denims, Nameless stepped on stage after 1am amid loud cheering. He entertained the crowd with songs like ‘Boomba Train’, ‘Coming Home’, ‘Githurai’, ‘Inspire’ and ‘Butterfly’, a love themed song with a lyrical blend of English, Kiswahili and Luganda.

But what stirred up the audience most was the moment he sang his 2006 song ‘Sinzia’. Given how much the song got popular back in the day, it was little wonder that everybody got on their feet and sang along.

The lucky ones got an upclose selfie with the star in the course of the act when he jumped off the stage to engage his fans.

That was before he halted his performance and asked everybody to stand up and pray for bed ridden musician, Mowzey Radio.

The first part of the show brought to stage a host of popular comedians including MC Mariachi, Jajja Bruce, Dolibondo and four comic duos; Madrat & Chiko, The Talkers, Snake & Zolo and Crazy University. It was a marathon of laughter and letting loose.

Comedy Store host, Alex Muhangi went on his knees to appreciate the audience for their support despite the numerous times the show has had to change venue.

The UMA indoor facility is easily accessible, spacious and revellers no longer get to suffer inconveniences of weather.

The other highlights were perhaps the warm lighting and captivating stage set by Fenon Events.

Going by the turn-up, set up and delivery, Thursday’s show reaffirmed that Comedy Store could indeed be Kampala’s biggest weekly comedy event. 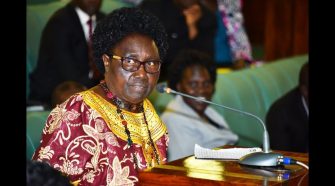