The President of Kenya, Uhuru Kenyatta has condemned an attempt over the weekend to assassinate Zimbabwe’s President, Emerson Mnangagwa at a political rally in Bulawayo, Zimbabwe’s second largest city.

Mr Mnangagwa had just finished addressing supporters of the ruling ZANU PF party when a blast occurred next to the podium at the white city stadium. Several people including top government officials as well as the President’s bodyguards were left injured. Mnangagwa was not hurt.

But Mr Kenyatta says the desire for leadership needn’t divide a South African country and her people, but instead strengthen democracy.

“As a long standing friend of Zimbabwe, Kenya sends its message of goodwill to President Emerson Mnangagwa and the people of the Republic of Zimbabwe,” Kenya’s President wrote on Twitter.

“Political competition should not fracture Zimbabweans but should be a measure to deepen their democratic credentials,” Kenyatta added.

This was not the first attempt to end the life of Mr Mnangagwa. On August 12 last year, he was rushed to Johannesburg South Africa after allegedly consuming poisoned food. 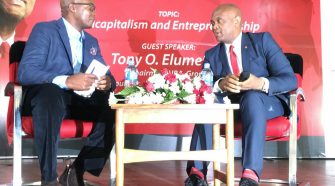