Kenya is mourning the death of Bob Collymore who has been the chief executive of telecom giant, Safaricom.

Collymore died in Nairobi Monday morning after a two-year long battle with Cancer. The Safaricom chairman, Nicholas Nganga said in a statement that Collymore passed on at his home.

Nganga said Collymore who was 61 had in October 2017 gone to UK to receive treatment for Acute Myeloid Leukemia and returned in July 2018 to resume his duties.

“He has been undergoing treatment for his condition since then in different hospitals and most recently at Aga Khan University,” the Safaricom Chairman added.

“On behalf of the Board of Safaricom, we extend our deepest condolences to his family, staff of Safaricom PLC, partners and the nation at large who he served selflessly and with joy”.

Collymore has been leading Safaricom which is East and Central Africa’s biggest telco services provider since November of 2010.

Safaricom posted a 13 per cent rise in its core earnings for the full year to end-March to Sh89.6 billion, driven by growth in M-Pesa, according to Standard.

“It is with deep sadness that I have this morning received news of the death of Safaricom CEO Bob Collymore after years of battling cancer. As a country, we’ve lost a distinguished corporate leader whose contribution to our national wellbeing will be missed, ” President Kenyatta said.

On his part, Kenya’s deputy President, William Ruto said: “Collymore was exemplary, brilliant and courageous, especially in the manner he battled cancer. Condolences to his family, colleagues and friends”.

In December 2018, Mr Kenyatta appointed Collymore a member of the Kenya Vision 2030 Delivery Board for a three-year term.

In May this year, Health Cabinet Secretary Sicily Kariuki appointed Collymore to the National Cancer Institute board.

In paying tribute to Collymore, Safaricom on Monday updated its Facebook profile with different colours in the logo. It changed the company logo from the normal green, white and red colours, to black, white, blue and grey.

He is survived by a wife, Wambui Kamiru and four children. 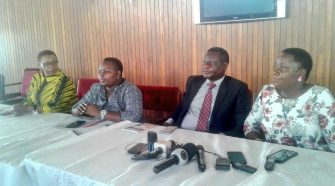