Police in Kiruhura district are hunting for assailants who abducted a 60-year-old man on Thursday, and robbed him of money amounting to Shs 3.5m.

The incident occured at around 2pm and the victim has identified as Moses Rutokire, a resident of Kacumbiro village in Rushere parish in Kiruhura district.

It is alleged that Rutokire was tied and dumped along the way in Rwetuma village, Kazo sub-county in Kazo district.

According to the Police spokesperson for Rwizi region, ASP Samson Kasasira, the victim was attacked by three assailants as he was on his way to deposit money to Rushere Sacco in Nyakasharara town.

It is reported that the victim had sold his two cows at a market in Nyakasharara.

“The victim was from selling his two cows in Nyakasharara cattle market and heading to Rushere Sacco to deposit some of the money when a white car with three occupants stopped by him and the driver asked if he was going to Rushere.”

Rutokire said that upon entering the car, he was diverted to Kazo route where he was strangled on the way.

“I entered the vehicle which instead turned and took Kazo route where I was strangled with a rope as my face was covered with a shirt,” said Rutokire.

ASP Kasasira says that Rutokire was recovered in a weak state late in the evening and exhibits were also recovered on Thursday evening at the scene of the crime.

Rutokire told police that cash totaling to Shs 3.5m and phones were stolen from him.

Kasasira says that no arrest has so far been made. The victim was issued with a medical form forwarded to Kiruhura Central Police Station for further management.

“These animal dealers are always known of handling cash money. I would advise them to get security for their businesses”. 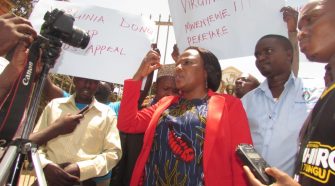