A section of leaders from the western district of Kisoro have petitioned the Prime Minister, Dr Ruhakana Rugunda asking for the unconditional release of former Inspector General of Police, Gen Kale Kayihura from Makindye Military barracks, where he is detained for questioning on his alleged involvement in several crimes, at the time when he headed the Police force.

According to their letter addressed to the President through the Prime Minister, the leaders claim that Gen Kayihura, offered commendable service to the country and so, he deserves better treatment.

“It is without any doubt that Gen Kale Kayihura selflessly served this country in various positions and has always diligently performed his duties throughout the years without blemish until now,” read their letter in part.

Gen Kayihura was arrested on orders of the President and Commander in Chief of the Defence Forces from his Lyantonde farm on June 13 before airlifting him to Kampala for interrogation.

For a month now, he has not been formally charged in court, neither has the army leadership officially made the charges he faces public. The leaders in Kisoro say that this violates his rights as a citizen of Uganda since the law of the land presumes all citizens innocent until proven guilty.

“He is presumed innocent under Article 28(3) of the Constitution of the Republic of Uganda, Article 23(4) of the constitution grants suspects under detention a right to be brought before court not later than 48 hours from the time of their arrest,” the letter added.

In addition, leaders say that: “While the law enforcement agencies must carry out their work in the interest of national and public security, it is incumbent on the same organs to perform their duties according to the established laws.”

They insist that their son of the soil is  being treated unfairly, given his unmeasurable role in ‘promoting security’ in the country.

“The people of Kisoro are very concerned that the government has unfairly treated General Kayihura despite the loyalty and unwavering commitment he displayed throughout his entire career,” Kisoro leaders explain in a letter.

Gen Kayihura, 63, born in Kisoro, served as Uganda Police Chief from 2005 until March 2018, when he was dropped and replaced with IGP Martins Okoth Ochola.

Kayihura came under fire by human rights activists during his tenure for detention of suspects beyond the lawful 48 hours and torture of suspects from a facility the General opened in Nalufenya.

He has also been severally accused of masterminding the kidnap and illegal repatriation of refugees from Uganda to neighbouring countries, an offence that almost dented Uganda’s record as having the most progressive policy on refugees in the world.

Many of his former police confidants were arrested by Chieftaincy of Military Intelligence (CMI) and arraigned before the Military Court Martial for a number of crimes including murder. Members of the boda boda outfit 2010 that he mentored are also facing the army court where they were charged for kidnap and murder.

During the vigil of the murderd former Police Spokesperson, President Museveni directed Gen Kayihura to rid police of criminal elements. The Gen however took to arresting of Muslims as the real murderers continued to reign terror on Ugandans. Some of the muslims took to court accusing the police force of framing them. 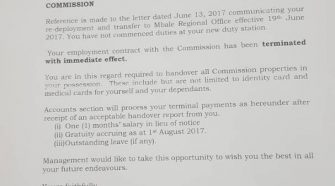