Gifted by nature, Uganda prides in housing magnificent, incredible and outstanding tourist attractions ranging from among others national parks, forests, mountains, hot springs and crater lakes and because of these, the country’s tourism sector has in the recent years registered a continuous outward shift in the number of Foreign tourists arriving into the country.

According to the Uganda Bureau of Statistics, Uganda received 1.8 million tourists in 2018, up from 1.4 million in 2017. It is projected that Uganda will receive 3 million tourists by the end of 2019. The trend communicates the need to further exploit Uganda’s tourist potential by improving on the existing attractions and also, identify the new ones and make their presence known to the World.

As such, Uganda Tourism Board (UTB) among them many steps it is undertaking to diversify the country’s tourism offerings, this week from September 11-13, its delegation led by the CEO Lilly Ajarova and a group of Journalists travelled more than 320 km to the Cycad Village in Kitagwenda district in Western Uganda.

Cycads are seed plants with a long fossil history that were formerly more abundant and more diverse than they are today. They typically have a stout and woody trunk with a crown of large, hard and stiff, evergreen pinnate leaves. The individual plants are either all male or all female (dioecious) depending on the size of their cones. Males have smaller cones compared to the females.

They typically grow very slowly and live very long, with some specimens known to be as much as 1,000 years old.

Uganda is said to be only country in the world with the type of Cycads known as Encephalartos Whitelokii growing in the wilderness. This type is believed to be the most spectacular and grows along river Mpanga in Kitagwenda district, having lived more than 320 million years. Experts say it used to be food of choice for dinosaurs.

So, given that history, the intention of the journey to Kitagwenda was to review and assess opportunities for product development of Cycads – one of the World’s rare prehistoric species.

The team left Kampala at around 4pm on Wednesday September 11 through Mubende to Rweteera Safari Park along Kamwenge road in Fort Portal on Lake Nyabikere where they spent the night before traveling again to Karubuguma cell, Nyakachwamba Parish in Ntara Sub-county in the newly created Kitagwenda district the following morning on Thursday September 12.

Led by Mwebingwa Mackay, a Cycad conservationist and Edward Charlton, a Cycad Expert from the United Kingdom, the team walked for about 15 minutes to Mpanga hydro electric dam along river Mpanga on whose banks many Cycads are seen growing.

Due to their striking resemblance, most people on the team mistook them for palms but only to be told that they are not closely related.

According to Mwebingwa, huge numbers of people especially foreigners from the United States, Australia who google and read about Cycads in Uganda frequently storm the area to see them.

He says the Cycads are believed to have been a delicacy for dinosaurs and “wherever we are having these plants growing on their own in wilderness, it is believed that dinosaurs were there and so, we believe that dinosaurs lived in this gorgeous and used to say this plant.”

He adds that dinosaurs would as well disperse the seeds after eating the fruit fronting this as a reason for the many Cycads along Mpanga gorge.

“Right now, the dinosaurs are no more but Baboons are here and they eat the Cycad fruits,” he said.

“It is a magical plant, it has that kind of attraction and people want to associate with it, that is the magic about it,” he adds.

On her part, Lilly Ajarova, the UTB Chief Executive Officer, who heaped praise on Mwebingwa for consistently pushing to attract the attention of the country towards understanding the uniqueness of Cycads, expressed pleasure about the development.

“As the CEO UTB, I picked interest and that is why I am here with my team to see the potential of developing the Cycad as a new tourism product. There is a story and we want to learn how to tell that story about the Cycad. We couldn’t start telling the story without experiencing it ourselves,” Ajarova noted.

She said the development of Cycads as a new tourism product fits in UTB’s deliberate efforts of diversifying the different tournament products in the country.

She explained that there is so much concentration on promoting the primates and their sites saying that developing other sites will as well diversify development around the country.

“As you are aware, UTB had created a framework of dividing the country into 13 clusters and so, if we continue identifying different features whether plants or landscape and develop them, we will be meeting our objectives of developing tourism across the country,” adds Ajarova.

But, the local residents at the Cycad village in Ntara Sub-county seem not to understand the value of the Cycads yet, a number of them are seen cut and burnt for charcoal as well as other human activities like cultivation and settlement since they are growing in their privately owned land. This Mwebingwa says has a possibility of causing its extinction of government doesn’t quickly intervene to gazette the area.

“If government can help in gazetting this area because as you can see, a lot of people are cutting and burning Cycads when cultivating their gardens. If it is gazetted and the product is well developed and protected, then people will start paying to see these wonder plants,” he notes.

One of the residents told SoftPower News that they cut Cycads near their gardens to keep away baboons which come to eat fruits and then spoil their crops.

Asked about her assessment of the area after the tour, Ajarova described the place as an interesting one with lots of natural resources.

She said: “River Mpanga and all the hills with rocks from the tourism point of view are all potential opportunities for experiences. But very unique of all is the Cycad plant and going through the farm was quite an experience which i think offers a great opportunity for us in Uganda to be able to tell the story of the dinosaurs.”

“It would be a special thing to know that at one time the dinosaurs lived here because the storyline says the Cycad plants are what the dinosaurs’ fed on. So, to get this story told out is a huge opportunity for our country,” Ajarova explained in an interview with this website.

She reiterated that as the Uganda Tourism Board, the task ahead of them is to profile the place and its activities for investment purposes saying when that is done, UTB will come back to promote and market it both domestically and internationally.

“We will play a role along different development chains from profiling the area for investment. Our role is to try and create exposure,” noted the UTB CEO.

On Cycads being of privately owned land, Ajarova explained that their interest is not to take land away from the people saying that the residents can invest and develop tourism on their own land.

“It doesn’t have to always be on land gazetted as protected to be conserved. Our role is to get people to appreciate what they have in their compounds, homes and gardens and use them sustainably,” said Ajarova.

She added that there is currently a government policy of Public Private Partnership where in this case government can come in and provide the major infrastructural development and the rest of the investment is done by private individuals.

Meanwhile, each member on the team including journalists was gifted a Cycad plant seedling Mwebingwa. They returned to Kampala on Friday afternoon. 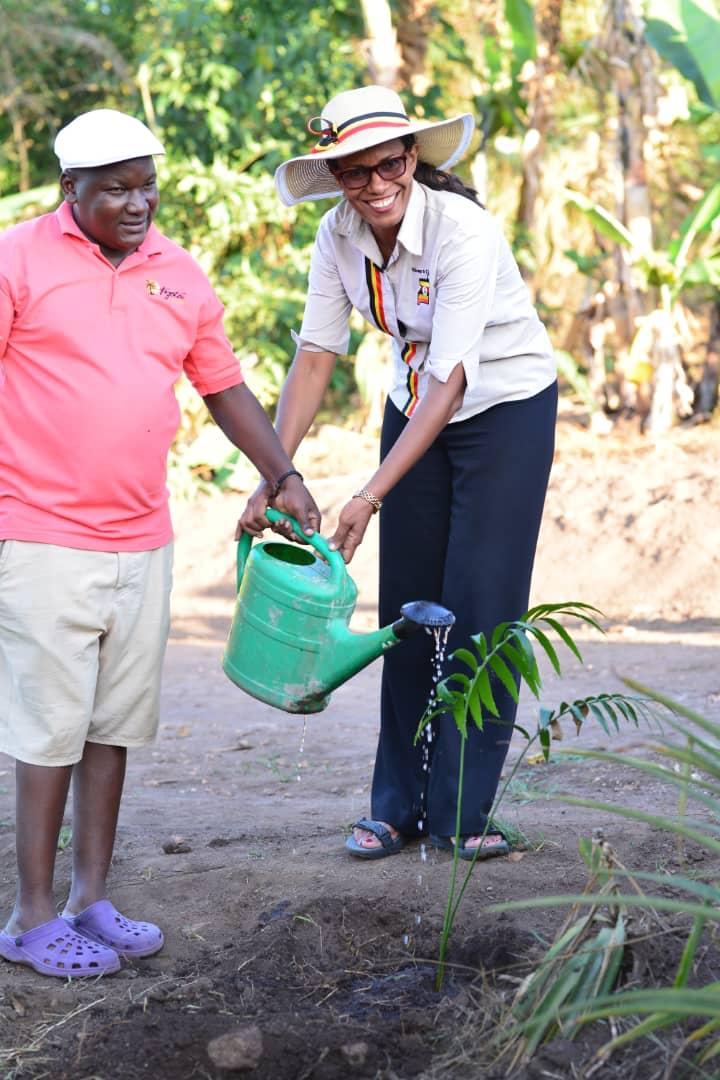