Boda Boda 2010 head, Abdallah Kitatta and his co-accused have Tuesday been charged afresh by the General Court Martial in Makindye for unlawfully possessing military equipment.

One by one, they declined to take plea after the offences were read to them by State Prosecutor, Maj Mugisha Raphael but instead said they had heard the charges but were not soldiers triable by the military court.

“I have heard the charges but I will not be tried by this court because I am not a soldier,” Kitatta and co-accused each told court as though they had rehearsed.

Gen Gutti advised the accused to seek counsel from their lawyers, Joseph
Kiryowa and Brian Moogi, on the seriousness of the charges and jurisdiction of the General Court Martial for offences such as those of persons found in possession of military equipment.

“May be you do not have a clear understanding of the charges you are facing,” Gen Gutti said before advising the accused against contempt of court.

The defence lawyers asked for more time to discuss jurisdiction with their clients.

Gen Gutti remanded Kitatta and group to Luzira until Feb 27 2018 before adjourning court.

Section 119 of the UPDF Act provides that every person found in unlawful possession of arms, ammunition or equipment ordinarily being the monopoly of the defense forces becomes subject to military law.

Kitatta and the other 12 suspects were arrested last month in operations conducted by military intelligence and other security agencies. They face charges of unlawful possession of military stores and failure to protect war materials.

The army said recently that the suspects were found with two pistols and a submachine gun. 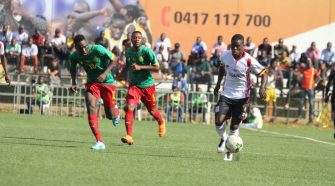 Uganda Edges Cameroon in CAF U20 Qualifiers with 1-0 Result