A section of Ugandans especially women’s rights activists have come out to question the intentions behind the unveiled ‘Miss Curvy Uganda’ pageant.

On Tuesday, the Minister of Tourism, Wildlife and Antiquities, Godfrey Kiwanda launched the pageant which will see the most sexy and curvaceous women selected and crowned later the in the year.

Kiwanda said sexy and curvy women are one of the many items on the long list of tourism products Uganda can use to attract many tourists in the country.

The Minister who addressed media at the launch at Mestil Hotel while pointing at a sample of some of the curvy women present, wondered why Uganda has taken long to identify these natural features of women and use them to promote tourism.

“We have naturally endowed nice looking women that are amazing to look at. Why don’t we use these people as a strategy to promote our tourism industry?”

However, the move he thought would receive a warm welcome, has attracted a backlash from some Ugandans who question whether he (Kiwanda) is not seeking to render women as sex objects.

Dr Catherine Odenyo Ndekera, the Vice President of Uganda Association of Uganda Women Medical Doctors said that despite the good gesture that ladies are to be engaged in one of the key sectors of the economy, there are fears that the initiative has been reduced to sex since sexy women with curves intend to be paraded for selection.

“The major concern is that the whole initiative is being reduced to using women as sex objects to promote tourism. The recent shock is the idea of parading women with hips or curves,” she said in a statement.

She said it is incumbent upon the women movements to seek clarity from the Ministry of Tourism on the actual intentions “in using women as sex objects.”

“We have come a long way and we cannot watch a whole Ministry reducing women to sex objects,” she said.

Odenyo further appealed to Uganda Womens Network (UWONET) to quickly engage this Ministry saying as women, they need to dissociate themselves from the campaign.

As a result, UWONET is currently convening a press conference on the matter at their offices in Ntinda on the matter.

Meanwhile, workers MP, Sam Lyomoki described the initiative as an embarrassment, attributed it to moral degeneration on the part of the country, threatening to raise the point of order on the floor of Parliament against the Tourism minister, to compel them apologise.

“I think as a country we have degenerated so low and ran out of ideas. How can the minister belittle women by parading them as sex objects? Isn’t that so embarrassing, degrading and disgraceful? asked a furious Lyomoki while talking to SoftPower News.

The headlines about the contest have sparked an uproar from Ugandans on social media, many questioning its rationale and how exactly it intends to position Uganda as a preferred tourist destination. Others have criticized the Minister for his misguided approach of using beauty queens to promote domestic tourism through his ‘Tulambule’ brainchild.

But Kiwanda believes there is is no cause for alarm. He yesterday said that Uganda has long appreciated smaller bodied women as a hallmark of beauty and the curvy pageant is just another campaign aimed at appreciating beauty in diversity. 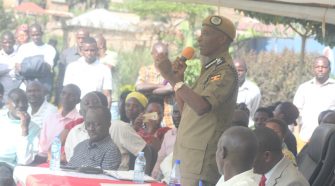