Uganda’s opposition politician and four-time Presidential candidate, Dr Kizza Besigye has been awarded with the “African Hero Award” at the Voice Achievers Awards 2019 held in Kenya.

The awards ceremony was held at Louis Leakey Hall, National Museum in Nairobi.

While receiving the Award in Nairobi, Besigye was accompanied by wife, Winnie Byanyima who this week was appointed to head UNAIDS, and son, Anselm.

We are on stage in solidarity with @kizzabesigye1 as he receives the African Hero Award. Giving voice 2 all African citizens is the challenge to address, he says. #VoiceAchieversAward

Congratulations comrade, Dr. @kizzabesigye1 on this well deserved recognition. May your courage, commitment and sacrifice continue to inspire all of us as we struggle for a better country. Aluta continua pic.twitter.com/jq3YqarSKn

Besigye, 63, is a physician by profession and was formerly in the military which he retired in 2001 at the rank of Colonel.

He served as the President of the FDC political party and has contested for President of Uganda in 2001, 2006, 2011, and 2016, losing all of them to the incumbent President Yoweri Museveni.

In 1999, Besigye wrote a document critical of the government, entitled “An Insider’s View of How the NRM Lost the Broad Base” and subsequently fell out with Museveni.

He accused the NRM of becoming a sectarian kleptocracy and a one-man dictatorship. Besigye was charged before a court-martial for “airing his views in the wrong forum”.

The document became the springboard for Besigye as a formidable challenger of Museveni.

The Voice Achievers Award is established in the Netherlands as project of The Voice magazine to recognize Africans and friends of Africa of outstanding achievement on a yearly basis. Since 2012, the award took a global outlook recognizing people outside of the Netherlands.

An Awards Committee of the Editorial Board of the Magazine nominates distinguished Africans and friends of Africa, worthy of appreciation and Honour.

The official website of the Awards states that: “The award is designed to serve to mentor people to aspire for excellence in all facets of human activities. It is a mixture of young and older minds being rewarded on the same platform”.

“This Award is unique because it offers not only recognition per excellence to the winners but also create an opportunity to meet other professionals and entrepreneurs from other communities in an interactive atmosphere to exchange new ideas,” it adds. 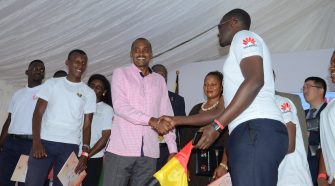