Police has said the explosion that reportedly went off at a gym in Nalya, Kyaliwajala, Wakiso district on Sunday evening was due to a faulty machine and is being treated as an accident.

The incident occurred at Marcos Gym at around 6pm. A heavy explosion is said to have been heard, causing fear among locals in the area at the time. Some shoppers at Quality Supermarket in the neighbourhood told this website that “the Supermarket was shaking like a serious earthquake”.

But, Kampala Metropolitan Police spokesperson SP Patrick Onyango initially said it was a Sauna explosion caused by failure by the managers to regulate its temperature.

“No one was at the Sauna apart from the five attendants who got minor injuries,” Onyango told this website.

Police later responded and evacuated victims were evacuated from the 3-floored building and cordoned off the scene of crime.

“Counter terrorism experts were called immediately and made initial assessment and confirmed that the explosion had occurred,” said ASP Luke Owoyesigyire, the Deputy Spokesperson for Kampala Metropolitan Police.

According to ASP Owoyesigyire, the preliminary post blast intervention revealed that the explosion was due to a steam bath boiler which exploded as a result of excess heat inside the sealed metallic device.

It is also suspected that the control valve for the boiler would have been faulty, Police added.

“The immediate gas escape from the sealed metallic container caused a mechanical explosion which damaged immediate houses within the vicinity”.

Owoyesigyire said no serious injuries were registered and that there were no bad intentions observed so far. 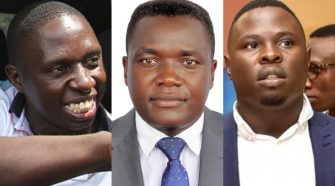