The Minister of Trade, Amelia Kyambadde has led a business delegation comprising of representatives from over 40 Ugandan companies attending the Uganda – Ireland Investment Forum taking place in Dublin, where government is looking to attract potential investors and tap into trade opportunities.

The two-day forum began on Monday. The Ugandan delegation is comprised of the High Commissioner of Uganda to the U.K and Ambassador accredited to Ireland, Julius Peter Moto, Senior officials from the Ministries of Trade, Foreign Affairs, Agriculture, Animal Industry and Fisheries, Uganda Investment Authority and NARO.

The Honorary Consul of Uganda to Ireland, Sylvia Gavigan, a representative of Kamageo (which promotes Uganda tourism in UK and Ireland) and Uganda High Commission, London also attended.

The main objectives of this forum was to promote trade, tourism and investment between Uganda and Ireland by bringing together private sectors and business community from both countries, showcasing available opportunities, and to enhance cooperation between Ugandan institutions and their Irish counterparts.

The delegation held discussions with over 60 Irish companies, including those that already have investments in Uganda, in the key sectors of agriculture, agro-processing, manufacturing, ICT, Tourism, Education and skills development.

Minister Amelia Kyambadde thanked the government of Ireland for supporting Uganda’s development efforts particularly in areas of trade, health, education and social protection. She noted the urgent need to scale up trade volume between Uganda and Ireland that currently stands at about 25 million Euros annually.

She highlighted the vast opportunities for trade and investment in Uganda in priority sectors and called upon the Irish business community to take them either as individual firms or through joint ventures with Ugandan counterparts.

Representatives of Irish companies in Uganda gave their experience on how they had set up profitable ventures and encouraged other companies from Ireland to follow.

They included Clarke Group which has investments in health, education and agriculture; Moyee Coffee; Jay Fortune; Shaw Academy (ICT) and Proudly Made in Africa.

The Director General Department of Foreign Affairs and Trade, Amb. Ruairi de Burca underscored the importance that Ireland attaches to its bilateral relations with Uganda.

He noted that the bilateral relations had reached a milestone of twenty-five years since Ireland’s Embassy in Kampala was opened.

The Director General called upon the private sector representatives of both countries to seize the vast opportunities for trade and investment, noting that Ireland’s Africa Agri-food Development Programme can provide matching financial support to joint ventures between Irish and Uganda companies.

A number of Irish companies expressed interest in investing in Uganda and proposed that a trade delegation to Uganda be organized as the next step.

The Minister and her delegation will also attend Ireland’s National Ploughing Championship from September 17 to 19. It is one of Europe’s leading agriculture and trade exhibitions with over 1,700 companies participating and an expected 210,000 visitors. Uganda has a stall where its participating companies will showcase products and seek partnerships.

Kyambadde will hold meetings with the Minister for Business, Enterprise and Innovation, Hon. Heather Humpreys, the Minister o State for Diaspora and International Development, Ciaran Cannon and the CEO of Bord Bia (The Irish Food Board).

She will later sign a Memorandum of Understanding between Government of Uganda and Government of Ireland on establishment of a Political Consultation Mechanism (PCM) covering areas of bilateral, regional and international interest, trade and development cooperation. 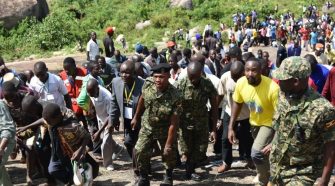