Legislators have expressed grief following the tragic death of over 30 Ugandans who perished in a boat accident on Saturday, appealing to government to put in place stringent measures to regulate water transport in the country.

A total of over 30 bodies have so far been retrieved while 26 people are reported to have been rescued by Police and the UPDF after the boat they were sailing on capsized in Lake Victoria.

On Monday, the Mitooma Woman MP, Jovah Kamateeka termed as “very painful” and “very sad” the fact that people could perish in such an accident due to negligence on the part of the boat owners.

Kamateeka pondered how the proprietors of the ill-fated boat disregarded the lives of the innocent revellers by letting them on a boat they were aware was not in a good mechanical condition.

“It is sad that the owners also perished in the accident, it could have been better that they stayed alive and be held accountable so that others would learn,” Kamateka said.

The legislator extended condolencses to those who lost their loved ones but appealed to owners of vehicles, transportation carriers and other facilities “to make sure that these facilities are in good condition so that lives are not lost.”

She also called to question the issue of requisite regulations that guide operations of the vessels as well as regular maintaince.

On his part, Kibuku county MP, Herbert Kinobere accused authorities of corruption and conniving with the operators to allow a boat in dire state to sail on the waters let alone transporting people.

“Government should put emphasis on increasing security around the lake shores and landing sites. We should also fight corruption, it was because of corruption that such a boat in poor conditions would be allowed to transport people,” Kinobere said.

The Youth Member of Parliament for Western region, Mwine Mpaka wants the officers who were in charge of enforcement on the lake to be punished due to negligence and allowing a boat that was never licensed to transport people.

“There is clear evidence of negligence on the part of the marrines. There are clamis that the people over powered them but there is no way people could over power security officers that are meant to enforce the law,” Mwine said.

He requested government to increase the number of marine personnel on the lake since there are already existing laws and regulations to guide operations. 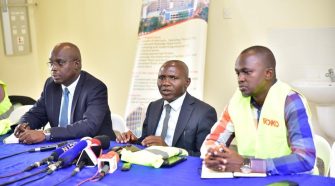