The work of ongoing land probe led by Lady Justice Catherine Bamugemereire is yet again suffering frustration as the Commission decries underfunding and resource constraints with staffers going two months without pay.

President Yoweri Museveni appointed the Commission in December of 2016 to investigate into the effectiveness of land law, processes of land acquisition, management and land registration.

At the time when the Commission handed its preliminary report to the President after four months, a total of 4,900 land related complaints had been received from the public.

Over the course of its work, the probe has uncovered several illegalities that have characterized land transactions, registration and management in Uganda including land grabbing, forceful evictions, influence peddling, extortion, conflict of interest among others. Some government officials especially those in the Ministry of Lands and other land offices have also been implicated in cases of land fraud.

Now, the Commission says it has suffered financial challenges resulting from budget cuts and delayed disbursement of funds which has severely affected their operations. This was revealed by the Commission’s Lead Counsel, Ebert Byenkya in an interview with NBS TV.

“Unfortunately, the Commission has been facing serious resource constraints especially since they extended the term of the Commission. There is a mismatch between the job that is being done, the way we plan and the things we want to do, and the thinking of the people who are providing the money,” Byenkya said.

“When they give us the job, we plan for the job – we say we need to go to these places, we need this number of staff to investigate, this number of things done,” Byenkya said.

He said that when President Museveni extended the tenure of the investigation in May of last year by another 18 months, the Commission created a budget and developed a plan which were then submitted to government.

“Unfortunately, we can’t fund ourselves, our budget was slashed by more than half. And that has had serious consequences”.

Byenkya said that unlike last year when the members of the Commission managed to travel extensively across the country for the field visits and regional hearings, it is more difficult under the current circumstances.

“Now we are almost unable to travel anywhere, there are people who are unable to reach us to express themselves. Underfunding is a big issue and unfortunately it has become perennial,” the lead counsel revealed.

“We are waiting for the release of this Quarter but what is going to be released is way under what we need. One of the problems is – all the Commission, from the bottom staff up, have not been paid since October. Even if they [government] release a certain amount of money, we are going to stay in arrears”.

He says that the government’s funding mechanism to the Commission is by implication handicapping its works rather than facilitate it.

This is not the first time the Commission is complaining about financial constraints. In October of 2018, Justice Catherine Bamugemereire raised similar concerns of hardships in operations and nonpayment of staff.

“People are calling us everywhere but for the last four months, we have not had any provisions at all for the operations of this Commission. We have had no provisions at all. We were not on the budget, and we hope to be on the budget this week or next week,” she said in her comments during one of the hearing sessions in October last year.

“We aren’t part of the budgeting process, we are an afterthought. It’s a difficult thing for us. That yes, we would like to be everywhere but we’ve been resource constrained for the last four months,” she said then. 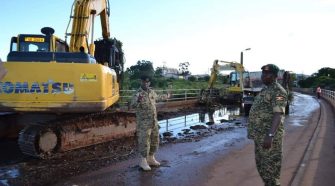