The self styled Uganda Peoples Congress (UPC) Vice President and Member of Milton Obote Foundation (MOF), counsel Peter Walubiri has paid tribute to the fallen party leader, Joseph Bossa and vowed to continue fighting so as to redeem the party from its “captors”.

The country woke up on Tuesday morning only to learn of the demise of the senior citizen, Joseph Bossa, who passed on in The Hague in Netherland after several months undergoing treatment for cancer of the colon.

At the time of his death, Bossa and three of his other colleagues had allegedly been expelled from the party President, Jimmy Akena’s leadership. They were accused of showing out as party leaders.

While paying tribute to the late, Walubiri noted that the passing of Joseph Bossa, ‘President of the Uganda People’s Congress’, at this critical time is a great challenge to the UPC and a loss to Uganda.

“Mr. Bossa was a distinguished lawyer. He served and left an impeccable record as Legal Secretary of Bank of Uganda before retiring to private legal practice, Walubiri said.

Walubiri noted that when Bossa was requested to join the leadership of UPC, he did not hesitate and he served diligently as Secretary General, Vice President and upon the resignation of Party President Olara Otunu, he took on the office of Party President.

“He has weathered the storms when the State assisted an impostor to unconstitutionally take over the party headquarters and claim to be the legitimate leader of the Party. Neither a demagogue nor a populist, he went on with his work calmly, analytically but firmly and on sound principles, Walubiri noted.

Walubiri added that Bossa defended the party and wrote a very lucid book on the 1966 political crisis, whose history is the subject of biased distortion.

“He represented a return of Buganda to its historic leadership of UPC (UNC). The party and the country will miss him.”

Walubiri noted that now that Bossa has passed on, he (Waluburi) will not relent on his fight to redeem UPC party from “those who grabbed it”.

As such, he reveled that he has henceforth assumed the role of the Party President.

Joseph Bossa assumed party leadership after resignation by Olara Otunnu in May 2015 whose leadership was dethroned on May 30, 2015 after the District Conference Elections of the party that saw Akena voted President with landslide victory. 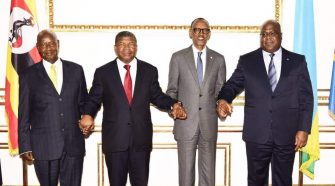