City lawyer, Paul Wanyoto has come out to give his version of events after he was named in an incident in which two of his partners, two foreigners from South Korea are said to have been fleeced of Shs 1.4 billion by police officers.

An account in one of the dailies stated that Wanyoto had set up a meeting between the two South Koreans; Park Seunghoon and Jang Seungkhoon, and gold dealers as the foreigners were interested in buying gold. It is at this point that police officers showed up and forcefully took the money and arrested Park and Jang.

However, Wanyoto who works with Web Advocates and Solicitors has clarified that the two were not his clients as the news story alleged but rather, they were business partners who attempted to double cross him. He says that he opened a company named Mckinley Resource Company Ltd together with Jang Seungkhoon, Ha Dongsuh and Park Seughoon. The company was to deal in minerals.

They would later open up an Account with Diamond Trust Bank and begin to mobilize money. Part of the initial capital came from Korea to a tune of USD 480,000.

“The bank flashed the Account, they sent me an email to justify the funds. I justified the funds saying funds were for office opening, vehicle buying, house rent, acquiring mineral dealers license and the work permits of the Koreans etc,” Wanyoto says.

At this point, his Korean partners Jang and Park were in Uganda to oversee the process of setting up offices and having the operations up and running.

On Wednesday, he went together with the two to the bank and withdrew the USD 480,000 but soon, the Koreans “refused to do what we had agreed as justification for money… refused to pay for license, refused to pay for work permits and chose to deal with Congolese called Maraka Carlos who I later learnt had been arrested in Afganistan on suspicion of terrorism”.

He says that his partners had agreed with Maraka Carlos to use the UN Base in Entebbe to facilitate smuggling of gold from Congo, through Entebbe airport to Hong Kong so as to evade taxes.

“They did not conclude negotiations that day and i declined to be part of that. I advised that we take back the money to the bank. At 7pm, I personally went to the bank and deposited USD 400,000 leaving them with cash of USD 60,000 at Oasis Mall. Bank records can reflect this,” the lawyer and businessman explains.

His business counterparts were scheduled to meet with Maraka and many others.

On Thursday, Jang and Park suddenly called Wanyoto and said they needed to see him at his office. But they were shortly arrested while at his office.

“People at office called me and I spoke to the Korean who speaks English. He told me in confidence that our money in the bank is not safe because it could be blocked so, i should withdraw and hide it”.

“I went to the bank immediately and withdrew USD 415,000 and hid it, and began chasing their poice bond. They slept in cells at Katwe [police station] that night after I failed but was able to get them bond”.

According to Wanyoto, one of his partners convinced him to give him the money since they had made friends at Police whom they needed to give some money.

“I gave him the bag with the money and air tickets to Dubai as earlier requested that I book for them so they run away,” Wanyoto says.

At the face of it, this contradicts with the allegations in the media that Police officers were trying to deport the two Koreans. Unless the same officers had talked them into convincing Wanyoto to flee the country.

“I saw them dish money out and they even got a Police escort car to take them to Entebbe. I did not go with them,” he says.

The following day Saturday at 4am, he says, “over 20 police goons attacked my home for arrest and search but i wasn’t at home”.

“I learnt later it was the Koreans and Police claiming I had connived with Police to steal money”.

Wanyoto says he then called General Henry Tumukunde (Security Minister) and Police Director of CID, AIGP Grace Akulo and raised an alarm “saying I won’t meet these people until my security is guaranteed because storming my home at 4am is really not civil”.

Contrary to the claims lodged by his partners, Wanyoto says his business partners want to backflip and cheat him.

He wondered whether the Koreans found new business partners who guaranteed them security to smuggle gold and thereby opting to have him out of the picture.

His story however leaves numerous unanswered questions. It begs the question on the motive of the Koreans, what relationship they had with Carlos, what transpired during the time they spent at Katwe police station, why they gave out money to police officers and why they insisted they wanted to flee the country.

Wanyoto’s account could be an affirmation to what has previously been reported that Entebbe Airport is a smuggling hub for undeclared chunks of gold and other mineral resources, from conflict stricken DR Congo, causing billions of losses to the DRC government. 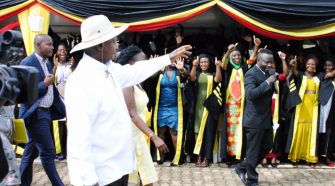 Museveni: Having Unemployed Youth Who are Educated and Healthy Isn’t a Bad Thing