The Local Defence Unit (LDU) personnel seen in a video clip making rounds on social media severally hitting a man lying on the ground, with a tool, has been arrested and is now in military detention at Makindye Military Barracks.

The incident happened on Thursday last week in Kisaasi, Nakawa Division where a uniformed LDU personnel was captured on video holding in his two hands what appears to be a spade which he used to hit the male civilian before picking his gun that he had placed aside.

In the clip, he is thereafter seen carrying the gun, and again uses the spade to hit the victim several times.

According to the Defence spokesperson, Brig Gen Richard Karemire, the detained LDU personnel has been identified as Etomet John Bosco and the victim is Richard Olowo, aged 40.

He said UPDF is taking care of the medical treatment of the victim.

Last month,  3 soldiers were also seen in a video clip using what resembled a rod to caution a civilian.

But in a tweet, Defence spokesperson, Brig Gen Richard Karemire, said the army doesn’t condole such acts on civilians and that all the three soldiers were arrested.

“There is a video clip circulating around of a civilian being manhandled by men in uniform. All soldiers that were at the scene during the incident have been arrested and will be punished,” Brig Karemire said.

He explained that UPDF will never condone acts of indiscipline within its ranks.

The army spokesperson on Tuesday noted that discipline of its officers is one of the core values of the Forces and any deviation from it is punishable. 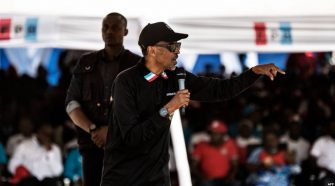