The electoral commission in Liberia has annouced that former footballer, George Weah has won 61.5% of the vote and poised to win the run-off Presidential election.

After hours of tallying, Liberia’s National Elections Commission chairman, Jerome Korkoyah, announced on Thursday that with 98.1% of the total votes counted, Weah and his Coalition for Democratic Change had won 61.5% of the vote.

This is a comfortable lead ahead of his main challenger in the election, Joseph Boakai, 73, who has so far polled 38.5%.

Weah, 51, the only African footballer to have won FIFA World Player of the Year and the coveted Ballon D’Or, won the first round of the election two months ago with 38.4% while Boakai garnered 28.8%.

Failure by Weah to pass the mandatory 50% mark forced an election re-run.

But now with 61.5%, the former Senator in Liberia’s Parliament is poised to succeed Ellen Johnson Sirleaf in what will be Liberia’s first democratic handover in seven decades.

Weah’s enthusiastic supporters stood outside the electoral commission headquarters in Liberia’s capital Monrovia on Thursday awaiting the announcement before celebrations broke out.

But there have been reports of low voter turn up given the timing of the polls which coincided with Christmas festivities.

This is the second time George Weah has contested for President in Liberia. In 2005, he contested for the top seat against the immediate past President, Sirleaf but he lost. 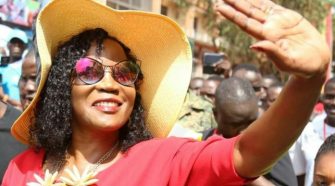