Lenders in Uganda are staying away from approving loans as prospects of repayment look grimmer than ever, a government report says. According to the Ministry of Finance May performance of the economy report, the value of loans approved by banks in April fellow by 67.9 per cent.

The Finance report says that “this reduction in new credit is attributed to reduced demand for loans and increased risk aversion by lenders in the face of low economic activity.” For some banks like Brac, the lending is done in groups that are currently not allowed to meet.

Low borrowing means dismal investment, low jobs, and low taxes. It is also a testament that banks and businesses alike are looking at a not so certain future. In the face of recession, no one knows when things can get back to normal. Bank of Uganda has further cut growth forecasts for this year to 2 per cent from 3 per cent and said it sees things get back to normalcy in 2022.

Even in the face of low loan approvals, figures indicate bankers still have faith in the manufacturing sector, which received the largest share of credit approved in April 2020 at 20.9 per cent. Other notable sector recipients of new credit during the month were Trade (16.5 per cent), Transport and Communication (16.3 per cent), Agriculture (14.2 per cent) and Personal loans & Household loans (11.6 per cent).

Meanwhile, the report also says so many borrowers were unable to meet their loan obligations in April, prompting the stock of money out there in terms of loans to grow. The stock of private sector credit grew by 1.8 per cent from 15.9 trillion in March to 16.2 trillion Shillings in April.

“This is due to credit relief measures issued by the Central Bank which exempted borrowers from honouring their loan obligations falling due, in an attempt to mitigate the adverse effects of the COVID-19 pandemic,” the report says.

Businesses and individuals who asked for loan restructuring can have up to 12 months of a holiday to pay their loans back. Last month, Centenary Bank said almost all people in sectors that were declared non-essential as the government locked down the country applied for the holiday.

In the 2020/21 financial year budget, Finance Minister Matia Kasaija postponed payment of several taxes until after September. This is expected to make some businesses stay with cash they can use to re-invest or pay loans.

Most of the private companies have either cut jobs or laid-off workers to stay in business. 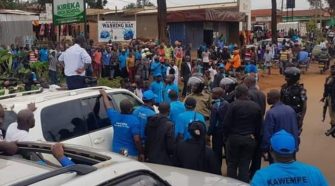