The position has been occupied by Sarah Kanyike who represents Makindye East in the Kampala Capital City Authority Council.

Kanyike is one of the individuals that President Yoweri Museveni recently nominated and asked the Public Service Commission to interview to fill various positions in the KCCA technical wing.

“I am writing to request you to interview… the following persons and find out whether they are suitable to man the indicated offices in Kampala City Authority,” reads Museveni’s letter to Justice Ralph Ochan, the Chairman of the Public Service Commission.

Others nominated include; Dr. Daniel Okello Ayen as Director for Public Health and Environment and Ms. Grace Akullo for Director, Human Resources and Administration.

Kanyike was appointed Director Gender and Community Services but Lukwago offered her three days to turndown the appointment, something she has not done yet.

Nyanjura, 31, started her political activism in 2001 at the age of 12. She felt that presidential candidate, Kiiza Besigye was not afforded a fair playing field to present and explain his manifesto. Since she was too young to vote, she asked her father to vote for Besigye.

She continued her activism in secondary school, participating in a student protest against certain school prefects and bad school food at Kyebambe Girls’ School. At Masheruka Girls School where she was elected chairperson of the school council.

This gave her confidence in her leadership skills and emboldened her to be more active in the opposition political party, Forum for Democratic Change (FDC).

At university, she continued her activism and mobilization for FDC. She was appointed vice president of Makerere University Guild and organized and or participated in a number of student demonstrations on campus. Her activism drew the attention of the FDC party leaders.

In 2012, she was arrested for co-writing a book “Is It a Fundamental Change?”. The book was critical of the ruling political party, National Resistance Movement. Arrested with her was the book’s co-writer, Ibrahim Bagaya Kisubi. The trial fizzled, but the accused spent time on remand at Luzira Maximum Security Prison.

After her first degree, she turned down a permanent position at the Uganda National Social Security Fund and instead took up temporary research assignments with opposition politicians at parliament. In 2016, she won by a wide margin the LCV Woman Representative position at Kampala Capital City Authority. 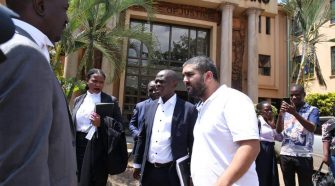