Lukwago who was addressing reporters at his office in Kampala, a day after Musisi tendered in her resignation, could not hide the fact that he was happy about the development.

In her resignation letter dated October 15, Musisi said that it has increasingly become difficult for KCCA to achieve its main targets partly due to political interests.

“One of the main challenges has been to reconcile the competing interests between political perspectives/decisions and strategic plans, policies, regulations and work plans of the KCCA technical team,” Musisi wrote.

The other problem cited by the Executive Director is the inefficiencies resulting from inadequate funding for the city Authority which she says, has left the city development program and service delivery demands unmet thus inability to meet government and public expectations.

Despite her continued highlighting of these issues over the last seven years to the Executive and the legislature, Musisi said, only a few efforts have been made to resolve them.

“On account of the above matters, I am not able to continue serving in position of Executive Director, KCCA,” she informed President Museveni in a letter.

But Erias Lukwago who has been at loggerheads with Musisi since her appointment seven and a half years ago, says Musisi must account before she leaves office.

“We are going to work out modalities of handling accountability issues. It’s not a matter of throwing in the towel and you run away,” Lukwago told reporters.

“No way, she will have to first account before she goes. We have reports which are still pending,” he added.

Lukwago said he was very happy that Musisi’s resignation has come to pass and went as far as singing a song to express his emotions.

“This is the day. It is a momentous occasion for me. I’m sorry to go overboard but it is because of excitement,” the Mayor said.

Musisi’s resignation letter listed different achievements which KCCA has registered while she was at the helm. These include growing KCCA’s asset portfolio from Shs 45billion back in 2011 to Shs 549 billion (1,350% increase) as of July 2017.

The two – Lukwago and Musisi have over the last few years bickered over almost everything; salaries, law enforcement, the KCCA carnival, financial management, powers to implement decisions, revenue mobilization among other issues.

Lukwago is an elected leader, while Musisi was appointed by the President. The former has in the recent past accused Musisi and the Minister of Kampala of pushing for the amendment of the KCCA Act with an aim of reducing his powers as the Mayor.

Many observers say the animosity between the two leaders was costing the city development since several plans were derailed by their rows.

On Tuesday, government spokesperson, Ofwono Opondo confirmed that President Museveni had received Musisi’s resignation letter but he could not reveal whether or not the President has accepted it. 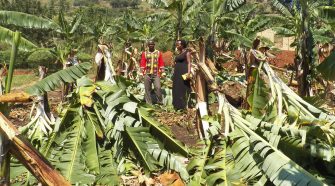