The family of Maj Gen (Rtd) Kasirye Ggwanga has dismissed as false social media claims that he had passed on Wednesday night.

The senior military officer was a couple of days back admitted at Nakasero Hospital where he has since been receiving treatment. Details regarding his sickness remain scanty as the family prefers keeping it out of the public.

Unconfirmed reports reveal that an operation was conducted on one of the veins in his head.

Journalist Steven Dunstan Busuulwa and close friend to Ggwanga said a fortnight ago that he had received a call from Ggwanga’s driver informing him about his sickness. The driver said Ggwanga was unconscious and had been put in the Intensive Care Unit at the same facility.

“He (Ggwanga) told his driver to call me and we talk before he got unconscious but my phone was out of reach, at the time,” Busuulwa told this news website.

Ggwanga has since remained in the Intensive Care Unit to date. He is still unconscious, according to family.

However, on Thursday morning, social media was awash with reports indicating that he had passed on. Many people have been sending condolence messages to family, friends and the country.

SoftPower News reached out to one of the family members who dismissed the claims.

“He is still alive though in a very critical condition and in the ICU of Nakasero Hospital. Those reports saying that he is dead should be disregarded,” Busuulwa told SoftPower News on Thursday.

The family has also regarded as fake the will attributed to Ggwanga making rounds on social media.

At the beginning of last month, Ggwanga was put under the care of military doctors. The Defence spokesperson, Brig Richard Karemire said then that the retired General had been admitted to the UPDF Senior Officers Diagnostic Centre based in Mbuya and that doctors were taking care of him. He didn’t provide further details.

It is not clear whether his current illness is related to the one he was admitted for, in the military facility in April.

Between 1986 and 2005, he served in several roles including as the LC5 chairman for Mubende District and as the director of stores in the UPDF.

On 31 January 2005, he retired from the UPDF at the rank of Brigadier. However, after three months on the outside, he came back to the military and asked to be re-instated. The Commander-in-Chief of allowed him to rejoin on a renewable contract of five years.

In March 2018, Kasirye Ggwanga was promoted from the rank of Brigadier to that of Major General, in a promotions exercise involving 1,384 men and women of the UPDF. He was also officially retired from the Uganda military, in 2018. 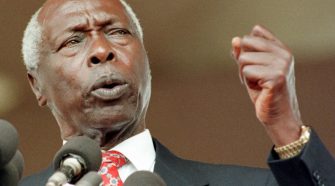