Maj Gen Paul Lokech who has been serving as the Commandant of the Uganda Rapid Deployment Capability Centre, in Jinja has been appointed as Uganda Peoples’ Defence Air Forces (UPDAF) Chief of Staff.

He replaces Maj Gen James Birungi who is now serving as the Commander of the Special Forces Command (SFC).

The reshuffle made by President Museveni on Thursday also saw
Brig Winston Byaruhanga deployed to head the Junior Staff College in Gaddafi barracks as Commandant.

Brig Bob Ogik who has been the course course coordinator at the staff college is now the Deputy commandant Senior Command and staff College.

Junior staff college was of recent commanded by Brig James Kinalwa who was appointed the Chief of training replacing Maj Gen Willis Byarugaba who retired this month.

Brig Peter Omolla, formerly Commander of the Mountain Brigade and the East African Standby Force has been appointed Commandant of the Uganda Rapid Deployment Capability Centre.

“The UPDF fraternity congratulates the general officers upon their elevation to higher positions of responsibility,” the Defence spokesperson, Brig Richard Karemire said while announcing the new transfers. 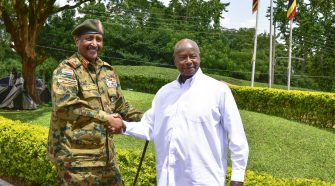