The Makerere University Council has given the Students Disciplinary Committee a two-week time frame to have concluded on the issue of the four students who were suspended by the University Management in the wake of the strike against the 15 percent hike in tuition fees.

A group of students including females who led a protest against the tuition fees policy on Monday last week were arrested as they marched to deliver a petition to the Office of the President. It later emerged that some of them were suspended while others were issued warning letters by the university Management.

At least 20 students were arrested by Police and later released on bond. One of the female students identified as Molllie Spellia, a Guild Representative Councilor, who was part of the demo, is among those suspended.

The student leaders have since been demanding that the suspension be rescinded and the warning letters revoked. This was part of the pleas made to the Office of the Speaker in a petition by the Association of Guild Presidents from different universities.

On Tuesday, the Makerere University Council also resolved that the suspended students be allowed to sit examinations in case the Students Disciplinary Committee has not concluded on their matters before examination period.

In addition, Council which is the highest decision making body of the university said that Management should provide mechanisms for the suspended students to undergo progressive assessments including tests and coursework assignments where applicable.

In the case of the 28 students who were issued warning letters by Management, Council has directed that appeals by affected students (those who wish to appeal the decision) be concluded within one week.

Meanwhile, the University Council has set up a committee set to investigate the allegations raised by the students in relation to the brutality that students suffered at the hands of the Police and military personnel during the ongoing strike.

The Committee will be headed by the Dan Kidega who is the Vice Chairperson of Council. Other members are Jolly Uzamukunda Karabaya, Dr Fredrick Kitoogo and Eng Dr Stephen Kagoda.

The allegations were part of the concerns raised by student leaders during Tuesday’s meeting.

The student leaders allege that Dr Eria Hisali and Gordon Murangira threatened and orchestrated the battering of students during the strike. During Tuesday’s meeting, the student leaders pleaded with Council to investigate these claims.

Murangira is a university employee formerly the Registrar of the College of Humanities and Social Sciences (CHUSS) and College of Computing and Information Sciences (CoCIS). He is currently deployed at office of Personal Assistant to Vice Chancellor.

Hisali is the Principal of College of Business and Management Sciences (CoBAMS).

Student leaders further requested for an investigation into the violence and brutality against students during the week-long unrest at the university. They also demand that the affected students be compensated.

Students also expressed concern over the increment in fees for Identity Cards which they say was effected without justification by Management. They further say the process of registration and issuance of I.Ds has had significant delays.

According to a communiqué from the meeting, the students also raised other concerns including the AIMS system which they say often breaks down causing inconvenience to the students.

Council noted “that allegations and battering students are taken seriously and need to be investigated” and that the Chairperson of Council would communicate the allegations to the Vice Chancellor.

The Council has appealed to students to return to normalcy and continue with regular university business. 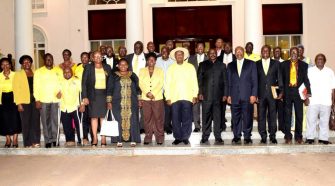