Rwandans cast their votes Friday to pick a new leader for the small East African nation.

Rwandans will choose between Philippe Mpayimana, a former journalist running for president of Rwanda, Frank Habineza of the Democratic Green Party of Rwanda, and President Paul Kagame.

Rwandans abroad will vote at their various missions while those in Uganda voted at the Rwanda High Commission in Kamwokya today, a day before the national election.

On Wednesday, President Paul Kagame run the campaign rally in Gicumbi where he was welcomed by thousands of RPF supporters who gathered at the Cyumba site.

Recounting the history of RPF in Gicumbi during the liberation struggle, Chairman Kagame said: “We used to have politics that divided people, impoverished citizens and we were told that is the democracy we deserved. They told us to live on our knees, begging them for our livelihood and accepting crumbs, and called it democracy.”

He added: “The battles that were fought here were about changing this history and regaining our dignity. Those who sacrificed their lives did not die in vain, those who had sleepless nights or went without food, did not do it so we would be told how we should live our lives! How can you tell me how to live when it is you I fought to regain my livelihood?  What RPF has fought for, lost people for, we cannot let it go to waste. Do not accept to be dictated to with useless lessons. Let us continue to stand up for our dignity, our livelihood, our country.”

After Cyumba site, Chairman Kagame proceeded to Rutare site where he held the last rally of his Northern Province tour.

RPF Chairman Kagame joining over 500,000 RPF supporters in celebrations at the end of the last campaign rally held in Gasabo #ToraKagame pic.twitter.com/snMdVn8lzy

Addressing the residents of Rutare, Kagame said: “For 23 years, we have been working together to build our security, our infrastructure, our country. We have achieved a lot but we still have a long way to go on this journey of transformation.  We will not betray the trust you have placed in us with your support. This is about making our own choices. We do not claim to know what is best for others but we choose what is best for us.”

Urging RPF supporters to strive for self-reliance, he added:” We are not looking for people to feed us, we are looking to make our own living and feed ourselves. For too long, Africa has been seen as deserving of charity and not prosperity and self-reliance. RPF was small when we started the liberation struggle. We won and today RPF and the nation have grown together.”

With a population of 427,311 people, the district of Gicumbi has seen improvements in the recent years, becoming one of the major suppliers of milk in the country.

It has also progressed in terms of access to water, where they stand above national average at 90.6% and access to health insurance where 95% of the population is insured. 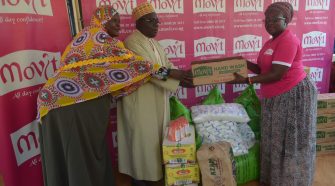