The Makerere University Council has resolved to maintain the 15% increment in tuition fees which was effected in July 2018, saying revising the fees structure would have significant implications on the financial status of the university and the ability of the university to continue providing services.

This as students press on with a week-long strike protesting the fees hike which they say is unfair and costly to both current students that those that will join the university in the near future.

Passed and effected in 2018, the policy provides for a 15% increment on newly admitted students on the tuition of the previous intake and pay the same amount until completion of their courses. The increment will span over 5 years from the intake of 2018/2019.

As such, Council decided that the 15% adjustment in fees shall not apply to functional fees for the remaining period of implementation of the fees structure appointed in 2018. Functional fees shall be capped at the rate applied on the admission cohort for 2019/20 academic year for the next three years.

Students are demanding that application of the 15% fees adjustment be halted for students who will join the university in the next and future academic years, while the current students shall continue with the fees structure upon which they were admitted.

The Guild President, Julius Kateregga, has previously said the strike is advocating for students that are yet to join Makerere and not necessarily the current students.

However, the Council resolved that the 15% increment shall continue to be applied on tuition fees for the remaining period of three years.

Reacting to the outcomes of the meeting, the Guild President said: “Yes, we could see the will, but you could see their (Council) hands are tied. So, they have not given us much from what we expected”.

“In as far as tuition is concerned, they have only altered functional fees. They suggest it is necessary tuition continues the way it is. We as students especially students like me who have a humble background were not listened to. We still appeal to them and we still appeal to the president”.

Commenting on the strike, the University Management said on Monday that there is no fees hike. The Acting Vice Chancellor, Umar Kakumba said that by design, the hike only affects fresh students.

Kakumba wondered why students would seek to challenge a policy which they themselves proposed moreso, now that it has been implemented twice.

“The policy came into effect in July 2018 and it was approved following a report that was presented by the previous Guild Cabinet which did a benchmark study in Universities around the region to establish whether it was really the best of the fees structure the Makerere University had made in the region, ” he said on Monday.

“We are saying we have not increased the fees in this academic year because the fees structure was determined in the 2018/2019 academic year. If you asked the continuing students, they will tell you that there has not been any fees increment from the fees they were admitted on. They are paying the same tuition until they complete their courses”. 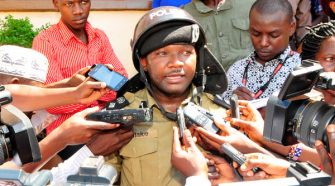