The situation at Makerere University and the neighboring Kikoni students’ residential area remains volatile as a strike against a 15% cumulative increment in tuition fees entered day two on Wednesday.

The Guild President, Julius Kateregga and the Guild Speaker were Wednesday arrested by Police after the strike turned violent. It is not yet clear where the two students are being held.

The strike began on Tuesday with a group of female students leading the demonstration. They were marching to present a petition (protesting the fees hike) to the Office of the President when Military Police personnel blocked them at the university’s main gate.

At least 20 students were arrested by Police and later released on bond. One of the female students identified as Molllie Spellia, a Guild Representative Councilor, and another male student have reportedly been suspended by the university, although the Management has not yet publicly commented on this.

Spellia told a reporter on Wednesday that she remains under preventive arrest in her hall of residence and that her movement is being restricted.

On Wednesday, angry students carried on with protests in the different parts of the campus, prompting Police to fire teargas in a bid to contain the violent situation. The protests later spread to Kikoni where a majority of the private students’ residences are situated.

The rioting students blocked the Sir Apollo Kagwa Road which separates the campus and Kikoni, with burning tyres and other objects, disrupting traffic flow. Other roads within the Kikoni area were also been blocked. Anti-riot Police could be seen engaging in running battles with students who were on the offensive.

Inside the university, the protesters moved around mobilizing other students and forcing those who were engaging in lectures out, to join the protest.

Most of the halls of residence have been cordoned off by security personal to prevent an escalation of violence.

Students say the tuition fees increment by 15 percent is obnoxious and should be rescinded by the Management. The Guild President and other student leaders have vowed to protest the increment.

In April last year, Makerere University Management suspended the increments in the tuition fees to be paid by students on select programs following pressure from the students.

Students had gone on strike opposing what they called ‘draconian’ policies including the tuition increment and abolition of meals.

Student leaders demanded that Management consults the university Council on the issues of contention and get back to them on the way forward.

Later the Vice Chancellor, Prof Barnabas Nawangwe, presented a signed statement to the student leaders committing that the tuition fees for selected Colleges including Health Sciences, Humanities, Veterinary which had earlier been revised upwards would be rescinded in the interim.

“As I told you, we are interested in improving the Management of the university and students. My pronouncement on improving the communication and interaction with the Guild is true,” the Vice Chancellor said last year.

“The policy is suspended. You demanded a suspension and Council has agreed,” he added.

The University has previously argued that the current tuition regime is insufficient to run the institution and to enable it the quality of services required. They say the tuition fees paid by students at Makerere remain the lowest compared to other public universities in the East African region. 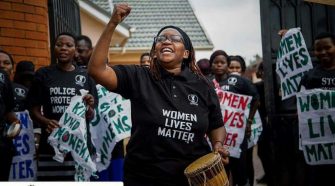